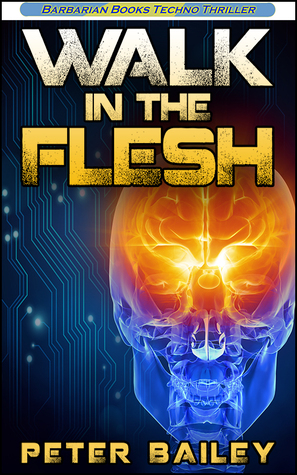 What Are You Reading Wednesdays is a weekly meme hosted by Its A Reading Thing. To participate, open your current read to page 34 and answer the three questions listed below. If you have a blog, feel free to leave a link down in the comments so that others can visit and see your post. If you don’t, just leave a note with your answers.

My Answers this week:
1. Walk in the Flesh by Peter Bailey

From Goodreads: In the aftermath of a terrorist attack Neil is given the chance to serve his country by serving up revenge. He soon becomes England’s premier spy and assassin. As a man he was unpleasant, dangerous and of little use. As a cyborg he is unpleasant, very dangerous and extremely useful. His suicide missions fit his strengths and his weaknesses. He exacts vengeance, kills without mercy, then destroys the evidence by destroying his temporary body. The aftermath is someone else’s problem. (read more)

2. The security check was executed with the deft touch of a pick pocket. While one guard made a great show of passing a portable metal detector over him, it was almost possible to miss the feather light touch from behind patting him down.

3. Right now, I’d have to say no, I would NOT like to live in this world. While not specified, I have the impression that the story takes place in the present or very near future, but there is enough corruption and evil going on that I’m not sure I’d ever feel safe!