Synopsis: If nature could invent intelligence of our scale in a blink of geologic time, who’s to say it hasn’t been done before…

A routine dig in Kazakhstan takes a radical turn for thirty-two-year-old anthropologist Claire Knowland when a stranger turns up at the site with a bizarre find from a remote section of the desolate Kazakh Steppe. Her initial skepticism of this mysterious discovery gives way to a realization that the find will shake the very foundations of our understanding of evolution and intelligence.

Corrupt politics of Kazakhstan force Claire to take reckless chances with the discovery. Among the allies she gathers in her fight to save herself and bring the discovery to light is Sergei Anachev, a brilliant but enigmatic Russian geologist who becomes her unlikely protector even as he deals with his own unknown crisis.

Ultimately, Claire finds herself fighting not just for the discovery and her academic reputation, but for her very life as great power conflict engulfs the unstable region and an unscrupulous oligarch attempts to take advantage of the chaos.

Drawing on Eugene Linden’s celebrated non-fiction investigations into what makes humans different from other species, this international thriller mixes fact and the fantastical, the realities of academic politics, and high stakes geopolitics—engaging the reader every step of the way.

END_OF_DOCUMENT_TOKEN_TO_BE_REPLACED

Action-adventure books for the mystery lover. In this series, modern-day archaeologist and adventurer Matthew Connor travels the globe with his two closest friends to unearth treasure and discover legends the world has all but forgotten. Indiana Jones meets the twenty-first century.

Finding the Inca’s lost City of Gold would be the discovery of a lifetime. But failing could mean her death…

Archaeologist Matthew Connor and his friends Cal and Robyn are finally home after a dangerous retrieval expedition in India. While they succeeded in obtaining the priceless Pandu artifact they sought, it almost cost them their lives. Still, Matthew is ready for the next adventure. Yet when new intel surfaces indicating the possible location of the legendary City of Gold, Matthew is hesitant to embark on the quest.

Not only is the evidence questionable but it means looking for the lost city of Paititi far away from where other explorers have concentrated their efforts. As appealing as making the discovery would be, it’s just too risky. But when Cal’s girlfriend, Sophie, is abducted by Matthew’s old nemesis who is dead-set on acquiring the Pandu statue, Matthew may be forced into action. Saving Sophie’s life means either breaking into the Royal Ontario Museum to steal the relic or offering up something no one in his or her right mind can refuse–the City of Gold.

Now Matthew and his two closest friends have to find a city and a treasure that have been lost for centuries. And they only have seven days to do it. As they race against the clock, they quickly discover that the streets they seek aren’t actually paved with gold, but with blood.

When Matthew’s friend Cal’s girlfriend is abducted, he, Cal, and their friend Robyn are forced to undertake a quest to find the lost city of gold to pay her ransom. Not everyone is what they seem, and there are much worse things in the jungle than the men the kidnapper has sent along to keep an eye on Matthew’s party. City of Gold is a fast-paced action adventure story that feels something like Friends-meets-Romancing the Stone. This was a quick, entertaining read – I devoured it in one sitting! Keep reading below for an excerpt.

NOTE: I received a free copy of this book in exchange for my honest review.

CAROLYN ARNOLD is the international best-selling and award-winning author of the Madison Knight, Brandon Fisher, and McKinley Mystery series. She is the only author with POLICE PROCEDURALS RESPECTED BY LAW ENFORCEMENT.™

Carolyn was born in a small town, but that doesn’t keep her from dreaming big. And on par with her large dreams is her overactive imagination that conjures up killers and cases to solve. She currently lives in a city near Toronto with her husband and two beagles, Max and Chelsea. She is also a member of Crime Writers of Canada.

And don’t forget to sign up for her newsletter for up-to-date information on release and special offers at http://carolynarnold.net/newsletters.

EXCERPT FROM CITY OF GOLD:

THE SOUND OF HIS THUMPING heartbeat was only dulled by the screeching monkeys that were performing aerial acrobatics in the tree canopy overhead. Their rhythmic swinging from one vine to the next urged his steps forward but not with the same convincing nature as did the bullets whizzing by his head.

Matthew glanced behind at his friends and was nearly met with a bullet between the eyes. He crouched low, an arm instinctively shooting up as if he’d drop faster with it atop his head. The round of shots hit a nearby tree, and splintering bark rained down on him.

“Hurry!” he called out, as he peered at his companions.

“What do you think we’re—” Cal lost his footing, tripping over an extended root, his arms flailing as he tried to regain his balance.

Robyn, who was a few steps ahead of Cal, held out a hand, her pace slowing as she helped steady him.

“Pick it up, Garcia!” Matthew didn’t miss her glare before he turned back around. He hurdled through the rainforest, leaping over some branches while dipping under others, parting dangling vines as he went, as if they were beaded curtains.

His lungs burned, and his muscles were on fire. One quick glance up, and the monkeys spurred him on again. Not that he needed more than the cries of the men who were chasing him. The voices were getting louder, too—growing closer.

Robyn caught up to Matthew. “What happened to natives with poison darts?”

“The modern-day savage packs an AK-47 and body armor.”

Several reports sounded. Another burst of ammunition splayed around them.

“If we get out of this alive, you owe me a drink.” Her smile oddly contrasted their situation.

Cal ran, holding the GPS out in front of him, his arm swaying up and down, and Matthew wasn’t sure how he read it with the motion.

“Where do you expect to take us, Cal? We’re in the middle of a damn jungle,” Robyn said.

Another deafening shot rang out and came close to hitting Matthew.

“You don’t have to tell me twice.” Matthew ramped up his speed, self-preservation at the top of his list while the idol secured in his backpack slipped down in priority.

Most of their pursuers were yelling in Hindi, but one voice came through in English. He was clearly the one giving directions, and from his accent, Matthew guessed he was American, possibly from one of the northern states.

“I have to stop…and…breathe.” Robyn held a hand to her chest.

“We stop and we’re dead. Keep moving.” Cal reached for her arm and yanked.

Matthew slowed his pace slightly. “Robyn, you could always get on Cal’s back.”

“What?” Cal lowered the arm that was holding the GPS.

She angled her head toward Matthew. “If you think I’m going to get up there like some child, you are sorely mistaken.”

Matthew laughed but stopped abruptly, his body following suit and coming to a quick halt. He was teetering on the edge of a cliff that was several stories high, looking straight down into a violent pool of rushing water. He lifted his gaze to an upstream waterfall that fed into the basin.

Cal caught Matthew’s backpack just in time and pulled him back to solid ground.

The rush of adrenaline made Matthew dizzy. He bent over, braced his hands on his knees, and tucked his head between his legs. He’d just come way too close to never reaching his twenty-ninth birthday.

More bullets fired over the empty space of the gorge.

Matthew forced himself to straighten to a stand. He hadn’t brought them all the way here to die. He’d come to retrieve a priceless artifact, and by all means, it was going to get back to Canada. He pulled off his sack, quickly assessed the condition of the zippers, and shrugged it back on. He tightened the straps, looking quickly at Cal and then at Robyn. One stood to each side of him. He had to act before he lost the courage. He put his arms out behind them.

Robyn’s eyes widened. “What are you doing, Matt? You can’t honestly be thinking of—”

Matthew wasn’t a religious man, but he was praying for them on the way down.

1. City of Gold by Carolyn Arnold 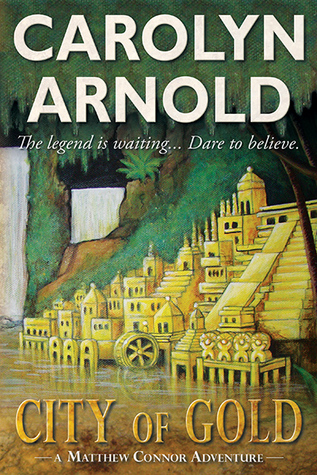 2. It wasn’t like he never visited the artifacts he’d tracked down. He just preferred not to see them on their opening nights.

3. The characters actually make their home in Canada, and I wouldn’t mind living there. However, in this story they take off for Bolivia in search of the City of Gold. I’ve lived in South America, but nowhere quite so remote as this. I don’t think I’d like it at all! I’ll stick with reading about it. 🙂

So what is everyone else reading this Wednesday?