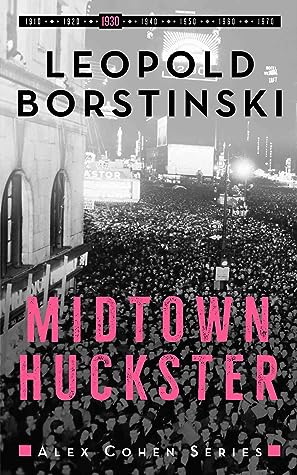 END_OF_DOCUMENT_TOKEN_TO_BE_REPLACED

Alex lived through the war, but will he survive the peace?

Jewish gang member, Alex comes back from the Great War almost destroyed by the horrors he has seen. When he is plucked from certain death by an old friend, he commits to making so much money he’ll never know that agony again.

But the route to the top is fraught with danger and every time he helps one of his powerful friends like Al Capone, he acquires more enemies who want to see him dead. When organised crime financier, Arnold Rothstein dies, the turmoil caused by his loss sets in train a chain of events which means Alex must once more fight for his life. How far would you go to attain your American dream?

The second book in the Alex Cohen series is a violent historical novel, which tears through the Prohibition years of the Jewish New York mob. Leopold Borstinski’s gripping crime noir pierces the heart of every reader like a bullet from Alex’s sniper rifle.

END_OF_DOCUMENT_TOKEN_TO_BE_REPLACED

For more than twenty-five years, Philadelphia homicide detective Bree Taggert has tucked away the nightmarish childhood memories of her parents’ murder-suicide…Until her younger sister, Erin, is killed in a crime that echoes that tragic night: innocent witnesses and a stormy marriage that ended in gunfire. There’s just one chilling difference. Erin’s husband, Justin, has vanished.

Bree knows how explosive the line between love and hate can be, yet the evidence against her troubled brother-in-law isn’t adding up. Teaming up with Justin’s old friend, former sheriff’s investigator and K-9 handler Matt Flynn, Bree vows to uncover the secrets of her sister’s life and death, as she promised Erin’s children. But as her investigation unfolds, the danger hits close to home. Once again, Bree’s family is caught in a death grip. And this time, it could be fatal for her.

END_OF_DOCUMENT_TOKEN_TO_BE_REPLACED

Three sisters’ secrets collide in a shocking novel of suspense by the Wall Street Journal and Amazon Charts bestselling author of the Mercy Kilpatrick series.

Twenty years ago Emily Mills’s father was murdered, and she found his body hanging in the backyard. Her younger sister, Madison, claims she was asleep in her room. Her older sister, Tara, claims she was out with friends. The tragedy drove their mother to suicide and Tara to leave town forever. The killer was caught. The case closed.

Ever since, Emily and Madison have tried to forget what happened that night—until an eerily similar murder brings it all back. It also brings FBI special agent Zander Wells to the Oregon logging town. As eager as he is to solve the brutal double slaying, he is just as intrigued with the mystery of Emily’s and her sisters’ past.

When more blood is shed, Zander suspects there’s a secret buried in this town no one wants unearthed. Is it something Emily and Madison don’t know? Or aren’t telling? And Tara? Maybe Emily can’t bear to find her. Because when Tara disappeared, she took a secret of her own with her.