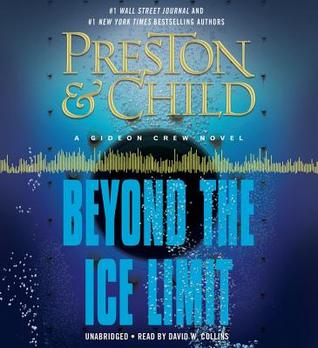 I have always been a fan of Douglas Preston and Lincoln child, writing together or individually, and The Ice Limit is one of my favorite stand-alones from the duo.

Gideon Crew, however, is not my favorite of their characters. As street smart as one would expect him to be considering his past, he always seems a bit naive, especially when it comes to women. This isn’t a flaw in the writing, just a character trait that I don’t particularly care for.

With that said, I was a little apprehensive going into this – I wanted to go back to the ice limit to see what would happen, but I wasn’t sure I wanted Gideon to come along. I shouldn’t have worried though – this turned out to be my favorite Gideon Crew novel so far. He had a skill set that made him a logical choice for the mission, and he fit right in with the rest of the highly-specialized crew.

The story really felt like a continuation of the original book, and that’s exactly what I was hoping for. It offers an interesting, if not entirely expected, conclusion to the story. If you’ve read and enjoyed The Ice Limit, you should definitely read this one.

The narrator for this audiobook was not bad, but not great. He had a pleasant voice, but put the emphasis in strange places occasionally, which would pull me back out of the story for a second while I re-said the sentence in my mind to make it sound right to me. Maybe no one else does that, but I found it a little distracting. 🙂