Meet Sunday Night, a woman with physical and psychological scars, and a killer instinct. . . .

Sunnie has spent years running from her past, burying secrets and building a life in which she needs no one and feels nothing. But a girl has gone missing, lost in the chaos of a bomb explosion, and the family needs Sunnie’s help.

Is the girl dead? Did someone take her? If she is out there, why doesn’t she want to be found? It’s time for Sunnie to face her own demons because they just might lead her to the truth about what really happened all those years ago.

I received a free copy of this book from NetGalley, and have voluntarily read and reviewed it. All thoughts / opinions expressed are my own. 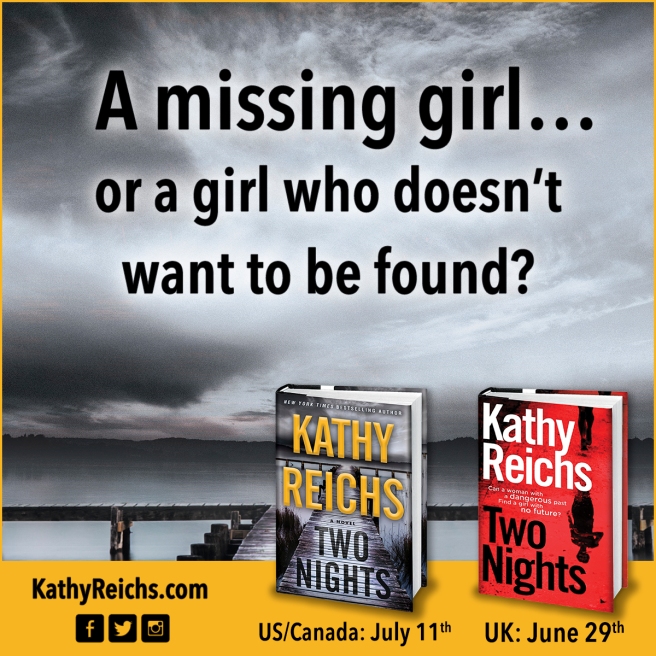 Two Nights is a standalone novel from author Kathy Reichs.

Sunday “Sunnie” Night is an emotionally damaged ex-police officer who lives alone with only her thoughts and a half-tamed squirrel to keep her company. Her first instinct is to refuse when she’s offered the job of finding a girl kidnapped after her mother and brother were killed in a terrorist bombing. Seeing possible similarities to her own troubled past in the girl’s misfortune leads her to change her mind, however, and with the help of her brother, she sets out on the trail of a cult to try to bring the girl home to her grandmother.

Told with alternating perspectives from chapter to chapter, it almost feels like there are two stories being delivered at once. Neither is confusing, but I was kept in the dark until very near the end – and left thinking about the book for a while afterwards wondering how I “didn’t see it” – that’s as much as i can say without spoilers.

I think this would have been a four-star read for me if i had connected more to Sunnie, but I had a hard time liking her at first. She was starting to grow on my by the end though, so I do hope this standalone might turn into a new series.