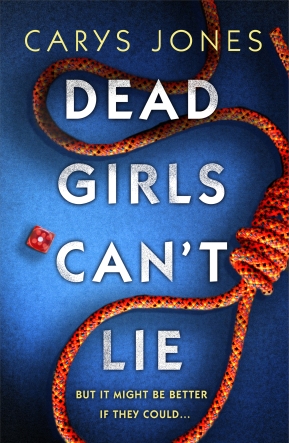 Best friends tell each other the truth – don’t they?

When North Stone’s best friend Kelly Orton is found hanging lifeless in a tree, North knows for certain it wasn’t suicide. Kelly had everything to live for – a loving boyfriend, a happy life, and most importantly of all, Kelly would never leave North all by herself.

The girls have been friends since childhood, devoted to each other, soul sisters, or at least that’s what North has always believed. But did Kelly feel the same way, or was she keeping secrets from her ‘best friend’ – deadly secrets…

When the police refuse to take North’s suspicions seriously, she sets out to investigate for herself. But her search soon takes her to a glamorous world with a seedy underbelly, and before long North is out of her depth and getting ever closer to danger. Determined to find the truth, she soon wishes that dead girls could lie, because the truth is too painful to believe…

Read on for a Taste of Dead Girls Can’t Lie…

The message arrived shortly after midnight when North was caught somewhere between sleep and surrender. Blurry-eyed she stared at her phone, at the cryptic message from an unknown sender.

‘I know,’ she whispered to the device as she lay on her sofa, bathed in the glow from her television which was on its second run through of Dark Crystal. ‘I know she’d never leave me.’

By dawn North was completely awake and the message was gone, wiped from her phone as though it were the fragment of a dream. But North didn’t care. It had given her the impetus she needed to get out of her flat and prove the point which had been gnawing at her since her best friend’s demise. She wasn’t alone in her conviction. That was all that mattered.

‘North Stone. That your name?’

‘Yes,’ North tightened her fingers which were clenched around her hands. It was cold in the interview room. Colder than she’d expected.

With a sigh she braced herself for the inevitable volley of questions which would now be flung back and forth across the table.

Why did your parents call you that?

Where are your parents?

The conclusion to such questions was always the same; North was strange. Everyone in their small South Downs town knew it. Everyone except Kelly. And she was the reason that North was even here. They were supposed to be talking about her.

‘My parents were mega into stargazing. I know, I know, I work in the local observatory the irony of which isn’t lost on me. Yes they were lost at sea during a romantic adventure on board a yacht. No I don’t expect them to ever return. It’s been eighteen years, I’m pretty sure they’re gone.’

The police officer’s silver eyebrows dropped into a flat, sympathetic line. He was obviously old enough to know the notorious story of what happened to the Stones. He was asking about her name to be polite. Kind even. And North did not have time for either placation. She was here on urgent business.

‘Look,’ North unclasped her hands and lay them flat on the table as though she were showing her cards in a high stakes poker game. ‘You’re wrong about Kelly Orton. She would never kill herself.’

The officer hung a little too heavily on the Miss for North’s liking.

‘And on a jogging trail? Absolutely not! No way! For starters, Kelly never went jogging. Like, ever. We’re both allergic to anything that makes you sweat. Seriously, Officer…’ she lifted her ashen eyes to meet his.

‘Childs,’ he stiffly informed her.

‘Officer Childs. You’re wrong about Kelly. You guys shouldn’t be ruling this as a suicide you should be launching a murder investigation.’

With a sigh, Officer Childs stood up, letting his chair grate noisily against the tiled floors. He walked over to the door to the interview room and opened it with one fluid motion, extending his body out into the hallway. ‘Angie, can you get in here?’

A moment later he was joined by another officer, a woman with bright red hair which stopped suddenly at her shoulders. Her mouth lifted into a pitying smile the second she saw North hunched on the other side of the table.

The air in the little room managed to hold the years’ old stench of stale cigarettes and coffee. A single strip light across the ceiling bathed everyone who sat in there in an unflattering light. Kelly would have hated it. She’d have tossed her golden hair over her shoulders and refused to sit in such a room. North twisted uncomfortably on her plastic chair.

‘I’ll handle this,’ Angie whispered to Officer Childs who eagerly left as she slid into his vacated seat. ‘So, Miss Stone.’ Her tone was clipped and formal. She reminded North of some of her more competent teachers during her time at Millwater Secondary. But thinking about school made her think of the Kelly from the past and she couldn’t do that. Not yet. Not when there were so many questions about the present left unanswered.

‘As I was telling your colleague,’ North adjusted herself to match the female officer in stature. Though she was much shorter than Angie, she could still push her shoulders back and lift her chin. She wanted to look confident. Especially when everyone was treating her like she was broken. ‘Kelly Orton did not kill herself. It’s impossible. Someone put her there. Someone killed her. This is a murder case.’

Carys Jones loves nothing more than to write and create stories which ignite the reader’s imagination. Based in Shropshire, England, Carys lives with her husband, two guinea pigs and her adored canine companion Rollo.