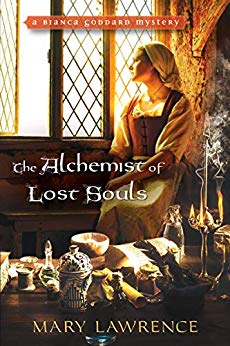 A dangerous element discovered by Bianca Goddard’s father falls into the wrong hands . . . leading to a chain of multiple murders.

Spring 1544: Now that she is with child, Bianca is more determined than ever to distance herself from her unstable father. Desperate to win back the favor of King Henry VIII, disgraced alchemist Albern Goddard plans to reveal a powerful new element he’s discovered–one with deadly potential. But when the substance is stolen, he is panicked and expects his daughter to help.

Soon after, a woman’s body is found behind the Dim Dragon Inn, an eerie green vapor rising from her breathless mouth. To her grave concern, Bianca has reason to suspect her own mother may be involved in the theft and the murder. As her husband John is conscripted into King Henry’s army to subdue Scottish resistance, Bianca must navigate a twisted and treacherous path among alchemists, apothecaries, chandlers, and scoundrels–to find out who among them is willing to kill to possess the element known as lapis mortem, the stone of death . . .

Bianca woke with a start. Her alchemy room sat in grainy darkness and she got up to open the window. A breeze pushed into the room riding on moonbeams that streamed over bottles and stillheads, washing them in lapis blue light. Bianca leaned against the wall next to the window and blinked up at the crystalline stars. She marveled over why they glittered and wondered how they got there. When she was small, Malva had told her that the stars were opalus gems that angels hung on the tapestries in heaven. Neither of them had ever seen one of those precious stones, but word circulated about the king’s fondness for them.

It had taken Bianca a while to fall asleep. Her mother’s harsh words earlier in the day kept repeating in her head. She had no explanation for her mother’s sudden anger except to believe Bianca had gotten too close to the truth. Yet the truth still eluded her.

Her thoughts ran to John and she wished she might see him one more time before he left. This would be his last night under a London sky for a while. Her breath caught at the thought of him never returning to sleep under it again.

Hobs leapt to the windowsill, demanding attention, unhappy he should be ignored. She stroked his back, and when he’d had enough, he escaped out the window to join a parade of creeping creatures outside their door.

Bianca absently watched her cat skulk down the alley; then she searched for the Queen Moon, who must have dipped behind the bridge. A tinge of malaise slipped into her stargazing, like a premonition of impending harm. She reasoned that the feeling was normal, that any young mother might grapple with self-doubt, facing a changed life. 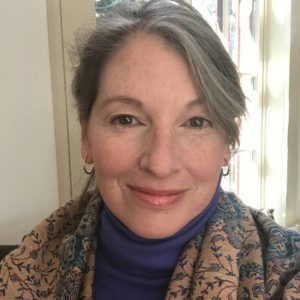 Mary Lawrence lives and farms in Maine and worked in the medical field for over twenty-five years before publishing her debut mystery, The Alchemist’s Daughter (Kensington, 2015). The book was named by Suspense Magazine as a “Best Book of 2015” in the historical mystery category. Her articles have appeared in several publications most notably the national news blog, The Daily Beast. The Bianca Goddard Mystery series also includes Death of an Alchemist, Death at St. Vedast, The Alchemist of Lost Souls, and the fifth title for 2020.

June 5 – The Book’s the Thing– SPOTLIGHT with EXCERPT