Author Roy Huff has a new release, Seven Rules of Time Travel, coming in July. Read on for more details and deals (including an upcoming FREE ebook) on some of his previous work. Check out the short story “Sand Dunes of Time” below, and feel free to leave your thoughts in the comments. Thank you Roy for sharing with us!

Synopsis:
Quinn Black is an ordinary New York salesman about to be thrust into the greatest race in human history. After a shocking turn of events, he discovers his current troubles were just the beginning. After numerous failed attempts to rewrite the recent past, Quinn learns the rules of time travel are not what he imagined. After a tragic loss, he enlists the help of an old friend. Together, they rush to fix the unfixable and invent the impossible. As their plight worsens, Quinn discovers all is not what it seems. And his actions could either save the human race or result in its ultimate destruction. Only time will tell if he succeeds. Seven Rules of Time Travel is a fast-paced science fiction thriller. One packed with a roller-coaster of twists and turns, moral challenges, and tempting opportunities that readers will be reliving years after they finish the final page.

Synopsis:
Two very different worlds, Easton Falls University and the magical realm of Everville are in dire need of a hero. Owen Sage embarks on an epic journey of monumental proportions to save these worlds all while fighting to keep the world within himself intact. This quest is not for the faint of heart nor is it for the weak of mind—only the bravest will succeed. Discovering the well-kept secret of The Fourth Pillar of Truth is only part of the feat. Owen will have to outwit the ever-powerful villain Governor Jahal and overcome countless other challenges along the way. Amongst all of the dragons, giants and grand chaos, will Owen’s acquired skills and wisdom be enough to save both worlds or will peril be the ultimate fate of all?

I let impatience get the better of me. It’s what I always did.

I slurped the last drop of water as the scorching hot sun burned my already blistered skin. I wasn’t sure how much longer I could last exposed in the never-ending sand dunes. Each one bled together. My eyes had begun to fail me. I couldn’t tell them apart.

Why didn’t I listen to her? I thought. But no. I had to jump right on through, consequences be damned. Fear and impatience, my two most common traits. Who could blame me? I just wanted to impress her. I wanted to finally give her something, make something, be worth something. And this was it, at least I thought so at the time.

I crawled a few more miles, not sure how I did it. I had lost all track of time and distance, and I had no clue how much farther I needed to travel to get there.

This morning felt like a lifetime ago. It literally was, but I don’t know if it was in the past or the future. I forgot to check. How is that even possible? How could I have not double-checked the time and date on the machine? Ridiculous!

I would hate myself even more if my life didn’t depend on focusing every last ounce of strength and sense into finding it. I’m not even sure if the portal will hold or even if it’s still there. The time window might already be gone.

The next several hours blurred into a stupor of confusion and insanity. Ghosts of the past laughed at my swollen, white-crusted lips. Desert voices yelled at me, echoing through the bone-dry air. They’re not real, I tried to say, but could only think. By that time, the remaining moisture had sealed my swollen lips shut.

By some miracle, a sliver of green emerged from the distant horizon. At first, I thought it was a mirage. But as I inched closer, the blades of grass and thick underbrush blossomed into an oasis of activity. My tongue watered from inside my mouth so much I could almost drink it.

A few more steps, that’s all I needed. That’s when I saw it, the behemoth of a creature, easily one-hundred times my height. It’s massive, leathery thigh struck the ground. Vibrations rippled across the desert’s edge, thundering in all directions. A jolt of adrenaline shot through my veins like an icy-hot drip of awareness.

My torso shot up, erect. My legs bolted from under me, which I had no control over. It was as if I were high above my own body watching someone else run, and then I came crashing back down. My heart jumped, ready to burst out of my chest. My legs ached, but I knew if I stopped, even for a second, they wouldn’t move again.

The creature’s long neck drove towards me, like a slithering sea-snake. “Don’t look back,” I said. “Don’t look back.” And then I remembered the image of Olympic runners, leaning forward and diving across the finish line.

The window emerged, a silvery silhouette reflecting back the image of the creature. Just a few more seconds, I thought. And right at the moment I thought all was lost, darkness descended upon me.

The creature’s mouth blotted out the sun. It’s razor-sharp teeth raced dangerously close to my chapped skin. As I dove forward arms first, the humid air of the creature’s throat kissed the back of my neck.

Something tore at the back of my heel, but I emerged intact on the other side minus my left shoe and a bit of skin. I instinctively smacked the time window’s left panel, cutting off the creature from the present.

I breathed a sigh of relief, my eyes closed in exhaustion. How nice it would be to see her face again. And I would say, “I’m sorry.” Because I was. How foolish of me? She had been right all along, and I knew it.

Cool fingers met mine, my eyes still closed. But when I opened them, the picture before me was more bizarre than the prior moment. This person, or thing, I couldn’t be sure, wasn’t my girlfriend. She bore no resemblance. She was beautiful in her own way, ivory skin, and almond, brown eyes.

But the extra pairs of arms and large tail told me I had made a tragic mistake. “Don’t do that again,” she said. Reality around me blurred. The image blinked, like a pixilated screen, curt lines of yellow and green, square blocks of solid color alternated against the remaining image.

“He’s coming to,” whispered a voice amidst the fog of otherwise intelligible noise. I blinked my eyes, but only darkness greeted me. Light slowly emerged, too bright at first but then eased itself in.

“So how was your first session,” the woman in front of me asked.

She wore a long, white coat. Large cylinders dotted the massive warehouse where I stood.

I exhaled, letting my pulse settle back down to a reasonable pace. “I’ve been a fool,” I said.

“You have. But you’re going to need several more sessions before we can ease you back into normal life.”

She had three sets of arms and a tail and bore the same face of the woman I saw moments before in the simulation. A few more employees strutted across the room, inspecting the readouts on a few containers.

“We’ve made a lot of progress since you went under. The first batch didn’t make it. Luckily for you, we’ve since perfected the process. It used to be, you’d have ten sessions before your brain adjusted to the new surroundings. But we’ve found the brain reacts best to a heightened survival response. And we’ve built you a new body too.”

It hadn’t occurred to me to look at myself. My head tilted down. I had three sets of arms, just like her. Otherwise, my body resembled my twenty-year-old self. Except for the extra limbs, it was a huge improvement over what I looked like just before I died.

“And per the terms in your life insurance policy, which has been invested this entire time, your net worth is currently three-hundred and eighty-seven billion dollars. That equates roughly to ninety-four million 2025 US dollars,” she said.

She touched her finger from her top right arm against my temple, activating the chip implant.

“And as you can see, we’ve set you up in a really nice home on the outskirts of lunar colony Alpha.”

“You’ve only got two more sessions. What do you want next? I’ve got buried alive or death by a thousand cuts.”

Before I could answer, her lower limb pressed a cold, metal needle against my arm.

“Death by thousand cuts it is,” she said.

Darkness engulfed me once more, but only for a moment. 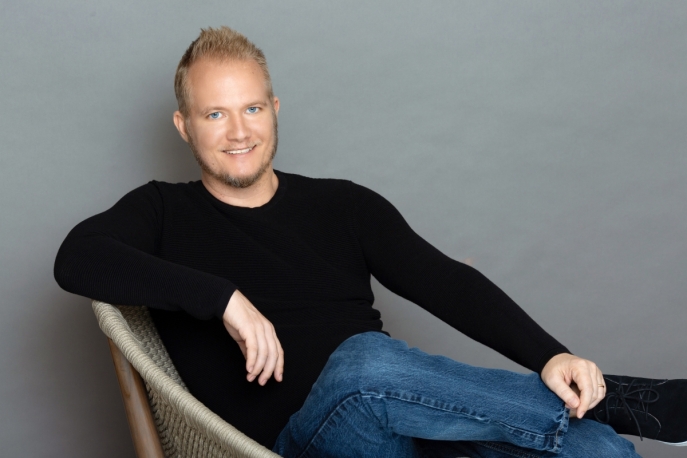 Roy Huff is a Hawaii-based best-selling author, peer-reviewed research scientist, and teacher. After overcoming significant childhood adversity, he moved to the islands and hasn’t looked back. He’s since earned five degrees, trained on geostationary satellites for NASA’s GOES-R Proving Ground, and written numerous bestsellers. He stumbled into writing, but what he didn’t stumble into is his love for all things science fiction and fantasy. Later, he contributed a series of fiction and non-fiction books as well as widely shared posts on how to design life on your terms. Despite early challenges, he embraces optimism, science, and creativity. He makes Hawaii his home, where he creates new worlds with the stroke of a pen and hopes you’ll come along for the amazing ride. You can download Roy Huff’s free sci-fi short at https://www.royhuff.net/salvationship or connect with him on Twitter, Facebook, & Instagram @realroyhuff