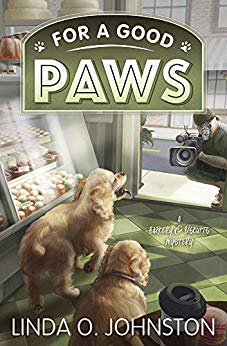 When Carrie Kennersley, owner of a two-part bakery that serves tasty treats to both dogs and humans, learns that a local killer is being paroled, she worries that danger will come barking at her door.

Ten years ago, Mike Holpurn was convicted of murdering the first female mayor of Knobcone Heights. Now, shortly after his release, Holpurn puts the whole town on edge by yelling at the former mayor’s husband, Henry Schulzer. After Schulzer is found dead, everyone assumes Holpurn is the culprit. But Carrie thinks there’s more to the story, especially since Holpurn claims Schulzer was the one who really killed the mayor. Carrie is determined to uncover the truth, even if it means things will get ruff.

END_OF_DOCUMENT_TOKEN_TO_BE_REPLACED 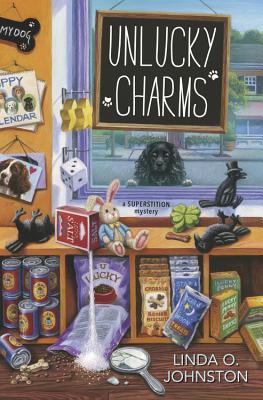 Synopsis: Rory Chasen, manager of the Lucky Dog Boutique in Destiny, California, hopes her new line of good-luck doggy toys will be a hit, especially the stuffed rabbits with extra-large feet. The timing of the line’s debut proves ill-fated, though, as several local shops—including Rory’s—are ransacked and vandalized with spilled salt and other unlucky charms.
The most likely culprit is disgruntled real estate agent Flora Curtival, whose issues with the town give her a motive. But after Flora is murdered and one of Rory’s toy rabbits is found with the body, Rory needs all the luck she can get while trying to determine just who killed the superstitious vandal.