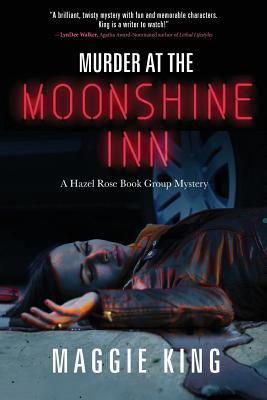 When high-powered executive Roxanne Howard dies in a pool of blood outside the Moonshine Inn, Richmond, Virginia’s premier redneck bar, the victim’s sister enlists Hazel Rose to ferret out the killer. At first Hazel balks–she’s a romance writer, not a detective. But Brad Jones, Rox’s husband, is the prime suspect. He’s also Hazel’s cousin, and Hazel believes in doing anything to help family. Never mind that Brad won’t give her the time of day–he’s still family.

Hazel recruits her book group members to help with the investigation. It’s not long before they discover any number of people who feel that a world without Rox Howard is just fine with them: Brad’s son believes that Rox and Brad were behind his mother’s death; Rox’s former young lover holds Rox responsible for a tragedy in his family; and one of Rox’s employees filed a wrongful termination lawsuit against her. The killer could be an angry regular from the Moonshine Inn–or just about anyone who ever crossed paths with the willful and manipulative Rox.