A Matter of Grave Concern
by Brenda Novak 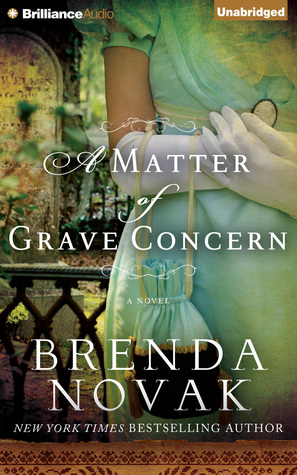 I listened to this as an audiobook during my commute back and forth to work. I have to admit that Historical romance is not one of my preferred genres, and someone who enjoys romance novels might have a different opinion of this book. I was in the library one Saturday afternoon with my two girls and wanted to grab something to listen to in a hurry. The title caught my eye, and I skimmed the beginning of the blurb on the back. I read just enough to make me think it was an historical mystery, and not even paying attention to the author’s name (which I would have recognized) I took it and checked out. Driving in to work that first Monday morning after picking it up, it didn’t take long to realize what I had. I might have stopped listening if I’d had another book to listen to in the car, but since it was all that i had with me, I kept going.

The story is about a young woman named Abby who’s father is a surgeon at Aldersgate School of Medicine. She decides to help the college keep their students by providing a corpse for the required anatomy classes. This requires Abby to deal with a group of resurectionists, or body snatchers. Little does she know that one of the gang is not what he is pretending to be. Max Wilder has actually joined the gang of grave robbers in search of his half sister, Madeline, who has gone missing and was last seen in the company of the gang’s leader, Jack Hurtsill.

This story had it’s ups and downs. At times the characters thoughts and concerns seemed repetitive and almost silly. Should she or shouldn’t she give in to Max. Will he or won’t he tell Abby the truth. I know some of that is necessary to help build tension, but it seemed a bit much. I’m not sure how I would have felt in Abby’s position as Max revealed one secret after another, instead of coming clean up front. It also seemed that after spending the first 2/3 of the book searching for Madeline, her part of the story was wrapped up in a rush. It was interesting to hear about what colleges were willing to condone to get the corpses they needed for their students to study medicine, however, and there was enough danger, suspense, and intrigue to keep my attention.

All in all, this was not a bad story, but there was too much graphic sex for my taste. If you don’t mind that, or are willing to do a little skimming, then it might be worth a read.

7 thoughts on “A Matter of Grave Concern, by Brenda Novak”