I would normally post my Top Ten Tuesday list today, but I’m on vacation this week and haven’t had time to write it! Instead, I’m posting a review I wrote a while ago that I never got around to sharing….

Woman Without Fear by J.P. Touzeau
Translated from French by Sarah Christine Varney 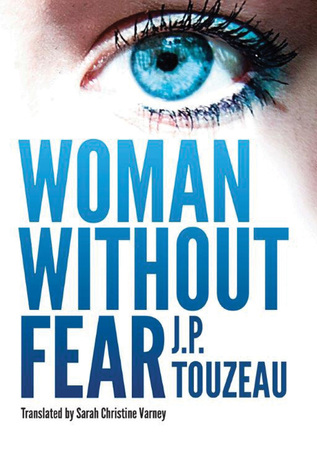 The story is about a shy woman named Trinity Silverman who, for reasons that are never fully explained, suffers from constant fear and anxiety. Despite this, her job is to go to trading conferences, and give presentations trying to sell her firm’s financial software. Her companion when she travels is a snail named Speedy that she keeps in a small Plexiglas box. On one such business trip to Las Vegas, she meets a man in the hotel bar who works for a pharmaceutical company. He offers her some pills that he has developed, promising that they will take away all of her fears.

I had a few issues with this book. Conversations were sometimes strange, but it was originally written in French and translated into English, so that could be the reason for the odd dialog. I also had a problem with the way Trinity befriended a hotel maid who allowed her to dig through the garbage to retrieve the her lost pills. I didn’t find their interaction and fast friendship at all believable. Most of all though, I was surprised at the amount of time spent on the snail who is not even mentioned in the book blurb. This was the first time I had ever read a novel told (at least in part) from a snail’s point of view. The author mentions frequently what Speedy is thinking or feeling, and even more frequently what he is smelling. Speedy seemed obsessed with pheromones. And sliced mushrooms.

It ended abruptly, and somewhat confusingly, but it was only part 1 of the story. There are 4 more books, but the author’s style and the unusual subject matter just didn’t grab my interest enough to make me want to keep reading to find out what happens.

I gave it 2 stars instead of 1, only because I know a little more about snails now than I did before I read the book. A malacologist might enjoy the story, but this one is just not for me.

Intrigued enough to want to read it anyway? Leave me an interesting fact about a snail, other mollusk, or anything else you choose in the comments. I’ll pick one at random on Friday (6/26/15), and send the winner my copy of Woman Without Fear! (18 or older, US only please)

One thought on “Review / Giveaway (ENDED) – Woman Without Fear by J.P. Touzeau”