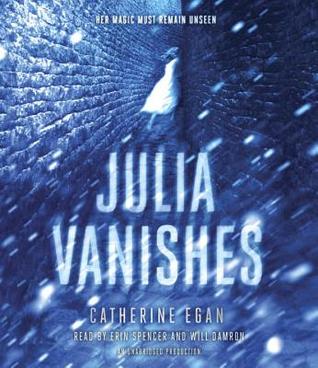 Julia has the unusual ability to be . . . unseen. Not invisible, exactly. Just beyond most people’s senses.

It’s a dangerous trait in a city that has banned all forms of magic and drowns witches in public Cleansings. But it’s a useful trait for a thief and a spy. And Julia has learned–crime pays.

She’s being paid very well indeed to infiltrate the grand house of Mrs. Och and report back on the odd characters who live there and the suspicous dealings that take place behind locked doors.

But what Julia discovers shakes her to the core. She certainly never imagined that the traitor in the house would turn out to be . . . her.

This was a fun story, with a unique world and an interesting set of characters. While not overtly steampunk, it did have elements of tech-blended-with-magic, and some gadgets that might have been too far-fetched in a purely fantasy setting.

Julia is a great heroine – she’s strong and street-smart, but still believably 16. She doubts herself and sometimes makes poor choices, but has the self-awareness necessary to realize when she has made a mistake, and the courage to set it right. I can’t wait for the next installment of this new series.

Age recommendation – while Julie is only 16, she does have a lover. There is nothing explicit, however, and I think the book would be fine for mature younger teens.

NOTE: I was provided with a free copy of the audiobook in exchange for my honest review. All thoughts and opinions are my own.

One thought on “Audiobook Review – Julia Vanishes by Catherine Egan”