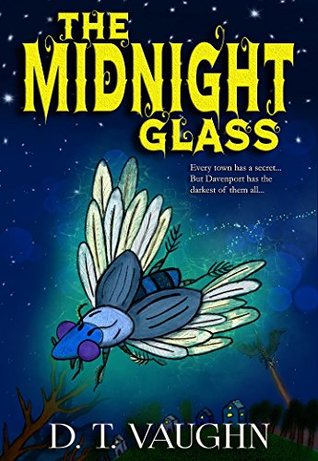 Every town has a secret… but Davenport has the darkest of them all…
Life is rough for eleven-year-old Wyatt Dumont. He’s too small to fend off his mean older sister, and the school bully picks on him every day. But life changes when his mother is offered a job in the secretive town of Davenport. Wyatt is excited for the move until he notices that some of the townsfolk are more than human. There s a man with green skin and gills, and a middle school teacher with red eyes and fangs! Even Wyatt s new classmates are a spark elf and a wulfyn–a werewolf, but don t call him that… or else!
Wyatt is panicked. But nothing alarms him more than the darkest secret of all: Davenport hasn’t seen the sun in over four hundred years. Wyatt quickly becomes obsessed with the town’s mysteries, and he begins to uncover the truth–one deadly secret at a time.

What a dark and twisted world Wyatt has moved to! He and his is family have no idea what to expect when they first move to Davenport. His mother has been offered a job, and the family moves to the new town sight unseen. Starting a new school with creatures he thought only existed in myths and legends as his classmates, Wyatt learns that kids are kids no matter what they look like, and that bullies are pretty much the same everywhere.

When strange things start to happen (even stranger than having a Minotaur for a bus driver, or a night that has lasted for 400 years),  Wyatt decides he has to get to the bottom of the town’s secrets. But who can he trust? The school principal who has a strange secret herself, his new werewolf friend, or the sister who hates him?

Fans of Charlie Bone or the Spiderwick series should really enjoy this story!

D. T. Vaughn is a writer and illustrator from San Diego, California. He is an admirer of the strange and supernatural, believing that it’s entirely possible to befriend a werewolf or spot a mermaid—under the right circumstances. Mr. Vaughn has worked in education with children of all ages, and he loves writing and drawing to spark empathy and imagination. The Midnight Glass is his first novel.