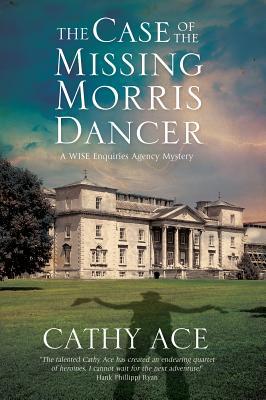 The Women of the WISE Enquiries Agency are back in a witty and intriguing new mystery.

The Anwen Morris Dancers are to play a pivotal role in the imminent nuptials of Henry, eighteenth Duke of Chellingworth. But it looks as though the wedding plans might go awry unless Mavis, Annie, Carol and Christine can help Althea, the Dowager Duchess, by finding a missing Morris man and a set of ancient and valuable artefacts in time for her son’s wedding.
Anwen-by-Wye might look like an idyllic Welsh village where family values reign and traditions still mean something in a modern world, but what will the WISE women find when they peer behind the respectable net curtains?

When Henry, a Welsh Duke, decides to be married, there are a myriad of traditions that he is expected to uphold. One such tradition involves Morris Dancers leading the happy couple through town from the church back to the family’s estate. After one of the dancers vanishes, the WISE Enquiry Agency is hired to look into the matter.

I really enjoyed the team of women doing the investigating in this story. Their distinct personalities work well together, as each has her own strengths to bring to the group. That and the Welsh countryside as the setting made this a very enjoyable read for me.

I had never heard of Morris Dancing before reading this book, so it’s a true pleasure to have the author here to explain it to us.

Thanks for having me along today – and for giving me the chance to talk about my forthcoming book THE CASE OF THE MISSING MORRIS DANCER. Maybe some folks aren’t familiar with what “Morris Dancing” is…so I’m going to take the chance to shed some light on this ancient form of folk-dance that’s pretty specific to Britain, and was particularly popular during Tudor times. It’s currently enjoying something of a revival of interest.

Morris Dancing, or The Morris, is a form of folk dancing that’s traditionally done by men, though now some Morris troupes (or sides, as they are also called) are inviting women to join, and there are few all-female Morris troupes in various parts of the UK. Its origins are lost: some say that the word “Morris” is a bastardization of “Moorish” and that the tradition began when dark-skinned immigrants danced in the streets of Britain back in the twelfth century. Others say that the black-face tradition in many Morris troupes is merely a result of the mischief-making element of the dances, with the painted face of the miscreant providing an effective disguise. Certainly there are many connections with traditional fertility beliefs, and some troupes have never had a black-faced dancer, but rather a green-faced one – representing the Green Man. There are also other “characters” in Morris dancing: The Maid, or Marian, is a man dressed as a woman who might refer to Robin Hood’s companion; the horse is a crudely fashioned horse’s head on a stick that’s “ridden” like a hobby-horse by one of the dancers, or else is a frame with a horse’ head that sits around the dancer’s waist, like a skirt.

Certainly there’s music – maybe a squeeze-box, or other instruments that allow folk tunes to be played, and often drums or some sort of percussion; then there are the handkerchiefs (or cloths) and sticks (or batons) used by some troupes. The cloths were often woven from local wool, and the batons cut from local copses…the cloths are waved, the batons are smacked together. Usually the dancers also wear little round bells on straps tied around their legs just below their knees, or on their arms, giving each motion of their limbs, and especially their stamping and jumping (of which there’s a great deal)a constant accompaniment of jingling. Highly decorated hats are not uncommon, and the sometimes the white shirt and trousers the men wear are set-off with vivid elasticated braces over their shoulders, crossing on their backs, or maybe they’ll wear highly decorated waistcoats.

You’ll see Morris Dancing mainly across England and Wales during the summer months, though each geographic region has its own highly distinctive versions of the dance. Check it out online – you’ll be able to see some fun videos.

Cathy Ace loves crime! It’s true – she discovered Nancy Drew in her local library, then found Agatha Christie on her Mum’s bookshelves, and she never looked back. Cathy happily admits that the characters she met between the book-covers as a child have influenced her writing. “Nancy Drew was plucky, strong and independent, and Agatha Christie’s puzzles engaged me every time. I love the sort of book that mixes intricate plotting with a dash of danger, and that’s what I’ve tried to create with my Cait Morgan Mystery Series. Beginning my new series, featuring the women of the WISE Enquiries Agency, I have been able to indulge my love of stately homes, village life and the interplay between characters that can take place in that sort of setting.”

Born and raised in Swansea, South Wales, Cathy is, like her heroine Cait Morgan, now a Canadian citizen. “Cait’s Welsh Canadian, as am I. They say ‘write what you know’, so a short, plus-sized Welsh woman, who’s quite bossy, fits the bill! But Cait and I are not one and the same: she’s got skills and talents I don’t possess,and I’m delighted to say that I don’t usually encounter corpses wherever I go! I’ve also chosen to burrow even deeper into my roots by creating a new cast of characters in the WISE women who come from all four corners of the United Kingdom and work in a uniquely British setting – a ducal estate set in the rolling Welsh countryside of the Wye Valley in Powys, where I spent a good deal of time when I was young.”

With a successful career in marketing having given her the chance to write training courses and textbooks, Cathy has now finally turned her attention to her real passion: crime fiction. Her short stories have appeared in multiple anthologies. Two of her works, “Dear George” and “Domestic Violence”, have also been produced by Jarvis & Ayres Productions as “Afternoon Reading” broadcasts for BBC Radio 4.

9 thoughts on “The Case of the Missing Morris Dancer – Guest Post and Giveaway!”