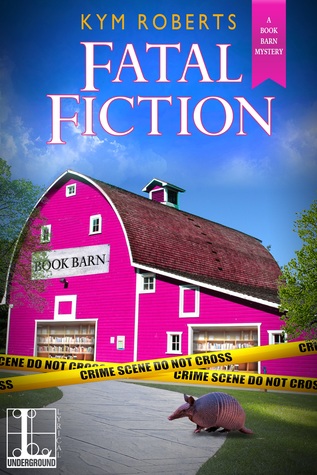 When Charli returns to her hometown of Hazel Rock, Texas, it’s only meant to be a quick trip. When first she and then her father are accused of murder, however, she decides to hang around until she can clear her dad’s name.

The barn-as-a-bookstore setting and an armadillo named Princess with the run of the place would have been enough to pique my interest in this cozy, but in Charli I also got a believable, fallible, and perfectly human heroine. She has her issues with the town and the people that she thought she’d left in the past, but doesn’t let it stop her from doing what’s right. I’m looking forward to more adventures with Charli and Princess!

Fatal Fiction is the first book in the Book Barn Mystery series.

Three career paths resonated for Kym Roberts during her early childhood: detective, investigative reporter, and . . .nun. Being a nun, however, dropped by the wayside when she became aware of boys—they were the spice of life she couldn’t deny. In high school her path was forged when she took her first job at a dry cleaners and met every cop in town, especially the lone female police officer in patrol. From that point on there was no stopping Kym’s pursuit of a career in law enforcement. Kym followed her dream and became a detective who fulfilled her desire to be an investigative reporter, with one extra perk—a badge. Promoted to sergeant, Kym spent the majority of her career in SVU. She retired from the job reluctantly when her husband dragged her kicking and screaming to another state, but writing continued to call her name, at least in her head. Visit her on the web at kymroberts.com.

NOTE: I voluntarily read and reviewed an advanced copy of the book. All opinions expressed are my own.