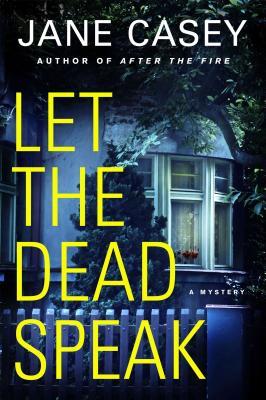 When eighteen-year-old Chloe Emery returns to her West London home she finds her mother missing, the house covered in blood. Everything points to murder, except for one thing: there’s no sign of the body.

London detective Maeve Kerrigan and the homicide team turn their attention to the neighbours. The ultra-religious Norrises are acting suspiciously; their teenage daughter and Chloe Emery definitely have something to hide. Then there’s William Turner, once accused of stabbing a schoolmate and the neighborhood’s favorite criminal. Is he merely a scapegoat, or is there more behind the charismatic facade?

As a body fails to materialize, Maeve must piece together a patchwork of testimonies and accusations. Who is lying, and who is not? And soon Maeve starts to realize that not only will the answer lead to Kate Emery, but more lives may hang in the balance.

This is the 7th novel in the Maeve Kerrigan series, but only the second one I have read. I have to say that I am really enjoying this series. The characters are very well rounded and realistic, and the procedural aspect of the mystery is detailed enough to make me feel as though I’m right there in the thick of things.

When 18 year old Chloe Emery leaves her father’s house earlier than planned to return home to her mother’s house, she’s greeted with what appears to be the scene of a homicide, but no body. As Maeve and her team dig into the matter, they find more and more suspects, and more people guilty of something, whether to not it be murder, than they know what to do with. The story is suspenseful, deliberately paced, and full of twists. Let the Dead Speak is a must-read for mystery lovers.

Sound good? You might also be interested in my review of book #6 in the series, After the Fire.

NOTE: Thanks to Netgalley and the publisher for the chance to read and review an advanced copy of the book. All thoughts and opinions expressed are my own.