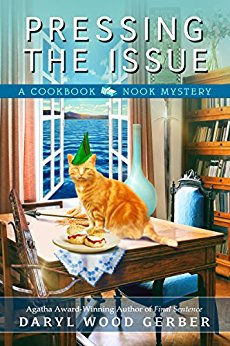 As the annual Renaissance Fair comes to Crystal Cove, Jenna Hart’s Cookbook Nook is packed with tasty treats and all things medieval, while her pal Bailey is ready to swoon over her upcoming nuptials at a local vineyard. But when the two friends discover the body of the vineyard’s owner bludgeoned by a winepress, all their merriment fades, along with their hopes for a vintage year.

Which churlish varlet did the deed? Was it the victim’s errant brother, who stood to inherit the vineyards? Or the owner’s crestfallen ex-girlfriend? Mayhap it was the newly arrived comely wench, or her jealous husband. Fie on them all! Verily, Jenna can’t rest until justice is served, and she vows to track down the killer. But can she sniff out the truth before the villainous culprit strikes again?

What could be more fun than a Cookbook Shop, a group of great friends, and a mystery to solve? A Renaissance Fair! I have always enjoyed visiting the Renaissance Faire in Bristol, Wisconsin and enjoyed reading about the Fair in Crystal Cove just as much.  Between getting ready for the fair with period cookbooks, costumes, and food and getting ready for her friend Bailey’s wedding, Jenna already has her hands full. After discovering the body of a local vineyard owner, Jenna has a perplexing mystery to solve on top of everything else. If Nick was so well liked, who would want him dead? This well-paced mystery kept me guessing with plenty of suspects, twists, and turns.

And now on to day 7 of the continuing interview with Daryl Wood Gerber, author of Pressing the Issue, the 6th Cookbook Nook Mystery.

Which of your books would you like to have made into a movie?

I would love to see any of my thrillers made into a movie—I love watching thrillers on the big screen—and I’d love to see any of my cozies made into TV series. I think the cozies, particularly, would do well on the Hallmark Channel. They are considered “blue sky” stories (happy endings), and the series is set on the beautiful coast of California. How much more picturesque could you get?

Did you ever, or do you still, take writing classes, seminars, etc.?

I took lots of classes, and I read a lot of books on writing. Yearly, I go to conferences for writers where they offer courses on plotting, dialogue, setting, character building, etc. I find refreshing my view of writing invaluable. I just bought a new workshop-style book for how to write a blockbuster. We’ll see if it works. Some of the books I’ve used repeatedly are Hallie Ephron’s  “Writing and Selling Your Mystery Novel,” and Chris Reardon’s “Don’t Murder Your Mystery.” One of my favorite seminars was developing the character of the killer. I would hate for my killers to be one-dimensional.

How hard is it to write about food?

Well, it’s interesting, I’ll tell you that. I was taught early on not to create a scene at a coffee table. It’s static and boring, a teacher said. But in a foodie mystery, there are lots of café and kitchen scenes. So…what I try to do is make food part of the story and the scenes involving food active. Do the cooking. Taste-test. Move around the kitchen preparing the table and the setting. As for the food itself? I work hard to find words to describe what my characters are either preparing or eating. In Pressing the Issue, because it’s all Renaissance Fair-style food, I spent a lot of hours testing out recipes. Then I had to decide where those foods fit in the story. For example, Rhett and Jenna purchase Hawker’s Mush at the fair and taste it for the first time. They go to Mum’s The Word diner and enjoy shepherd’s pie. At the Cookbook Nook, Katie gives a seminar on making pasties.

Are any of your characters based on people you know and are they okay with that?

Ha-ha. Are they okay with it? I haven’t asked them because I don’t tell them. I’ve based a few characters on people I know or on compilations of people I know. A long time ago, a writing instructor advised a group of us to change the sex or the whole look of a character so the people we knew wouldn’t have a clue we’d based the character on them. After all, it’s the personality that matters most, right?

Have you ever considered having characters from one series make an appearance in the other series?

I haven’t done it overtly, but I’ve referred to Charlotte Bessette from the Cheese Shop Mysteries in the Cookbook Nook Mysteries. They met online. She advised Jenna about some cheeses. Come to think of it, I reference Charlotte again in Pressing the Issue. If you read it, you’ll see why.  Plus I’ve mentioned a darling culinary bookshop on the coast of California in my French Bistro Mysteries. As for having the two worlds collide and actually seeing a character in that world, it might feel strange and take the reader out of the moment [almost breaking the fourth wall, as it’s referred to in theater], so I’m not sure I want to go that far…although Rhett’s folks do own a lovely restaurant in Napa Valley, and Jenna and he could to the wine country and stop in Bistro Rousseau for a bite, don’t you think?

Thank you to all who have come along on this journey and visited every day of the blog tour. I hope you’ve enjoyed learning a bit about me and my writing process.

Giveaway time! You have 2 chances to win – read on. (ENTRIES NOW CLOSED)

To one commenter today, Daryl is giving away commenter’s choice of one of the first five Cookbook Nook Mysteries or any of the Cheese Shop Mysteries PLUS some fun swag, including recipe cards and a utility measuring spoon. 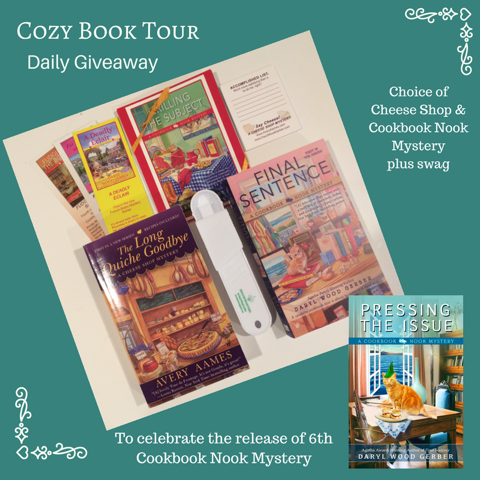 If the commenter visits ALL the blogs on the Cozy Blog Tour (there are 7 in a row, all interviews), he or she will be entered for the grand prize.  This is not a rafflecopter.  Just drop in and visit them all and leave a comment. The links are below. What’s the prize? Winner’s choice of a Cookbook Nook Mystery, winner’s choice of a Cheese Shop Mystery, a darling cat tea towel, a plush Tigger, and a Medieval Tapestries coloring book to honor the Renaissance Fair theme in the book. 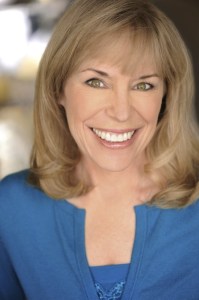 Agatha Award-winning Daryl Wood Gerber writes the brand new French Bistro Mysteries as well as the nationally bestselling Cookbook Nook Mysteries.  As Avery Aames, she pens the popular Cheese Shop Mysteries. A DEADLY ÊCLAIR, the first French Bistro Mystery, comes out November 2017. Daryl also writes stand-alone suspense: DAY OF SECRETS and GIRL ON THE RUN. Fun tidbit: as an actress, Daryl appeared in “Murder, She Wrote.” She loves to cook, and she has a frisky Goldendoodle named Sparky who keeps her in line!

Visit Daryl or Avery at www.darylwoodgerber.com.