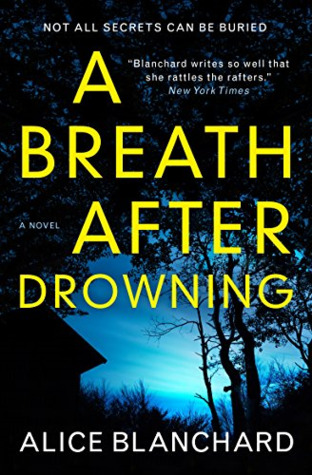 Child psychiatrist Kate Wolfe’s world comes crashing down when one of her young patients commits suicide, so when a troubled girl is left at the hospital ward, she doubts her ability to help.

However the girl knows things about Kate’s past, things she shouldn’t know, forcing Kate to face the murky evidence surrounding her own sister’s murder sixteen years before.

A murder for which a man is about to be executed.

Unearthing secrets about her own family, and forced to face both her difficult relationship with her distant father and the possibility that her mother might also have met a violent end, the shocking final twist brings Kate face to face with her deepest fear.

A Breath After Drowning was my first introduction to the work of Alice Blanchard. This psychological thriller kept me guessing, and the farther into the story I got, the faster I had to read because I couldn’t wait to find out how it ended. I felt enough empathy for Kate that it was as though a personal friend were going through what she was going through, and I just couldn’t put the book down.

I am beyond thrilled to have Alice Blanchard visiting here on The Book’s the Thing today – please join me in extending her a warm welcome!

I grew up in an old Connecticut farm house, where we had a lot of spiders.

I hated spiders.  They built their webs high in the corners of rooms where I couldn’t reach them.  They crawled across your arm while you were sleeping and left nasty bites.  If I saw a spider running across the wall, I’d squash it with a book.  A lot of my old children’s books have squash marks on the covers.  Even Charlotte’s Web.

Spiders were the bad guys.

One day, my father explained to me that spiders were actually good.  He said they were beneficial predators who killed bugs that carried disease.

Suddenly I saw spiders in a whole new light.  They weren’t so bad after all.  They became humanized in my eyes.

The best villains in literature and movies are spiderlike—humanized by the authors and screenwriters who invent them, and as complex and engaging as they are truly creepy.  They are the heroes of their own story, and we see our reflection in them.  Like spiders, great villains are not completely evil, and that’s fun and compelling.

Here are a few villains I love to hate:

Badlands, one of my favorite films, was written and directed by Terrence Malick.  The movie is loosely based on the true-life murder spree of Charlie Starkweather and his girlfriend across Nebraska and Wyoming in 1958, but Malick stages his action in the badlands of South Dakota.  The film focuses on the love story between Kit Carruthers, a charming psychopath, and Holly Sargis, his dangerously naïve girlfriend.  Their first act of fidelity is murdering Holly’s father and setting fire to the house she grew up in, since her father opposes their relationship.  Kit justifies every murderous act with self-effacing humor and a deadpan delivery, and somehow, we relate to this venomous spider.  I love the charismatic Kit Carruthers as much as I despise the psychopath he’s based on.

Norman Bates is an awkward young man who manages a creepy motel in the middle of nowhere.  He’s obsessed with two things—taxidermied birds and his dead mother.  Turns out, for Marion Crane, the Bates Motel is her cage.  Alfred Hitchcock’s Psycho is loosely based on the vile Ed Gein, a Wisconsin serial killer and body snatcher who made trophies out of corpses, such as a wastebasket composed of human skin.  Hitchcock transforms these atrocities into a cautionary tale of redemption and narcissism.  Actor Anthony Perkins manages to humanize the character of Norman Bates so successfully, you almost feel sorry for the guy.  He takes a shine to Marion the moment she checks into the motel.  She’s a good woman who’s done a bad thing for true love.  And just when Norman compels her to do the right thing, Norman does exactly the wrong thing.  “Psycho” spun off four sequels and a TV show, proving that I’m not the only one who loves this twisted mama’s boy.

The devil-worshipping seniors are the bad guys in Ira Levin’s Rosemary’s Baby.  But, for me, there’s an even deeper evil—Rosemary’s husband, Guy Woodhouse, is one of the most despicable villains you’ll ever meet.  He’s an ordinary “guy” who betrays his wife by making a deal with an Upper West Side coven of witches in order to succeed as an actor in New York City.  He tries to convince Rosemary that the Castevets are a harmless elderly couple, while knowing they want her to bear the Devil’s child.  Suddenly, Rosemary is drinking mysterious “vitamin” drinks and Guy gets his big break when the actor he’s understudying goes inexplicably blind.  Woodhouse looks the other way as Rosemary is raped by Satan.  Guy’s a malignant narcissist who figures they can always have another baby.  This spider was written with sinister charm by both Levin, and Polanski adapting the book to the screen.

In this lush neo-noir adaptation of the Philip K. Dick novel, Do Androids Dream of Electric Sheep?, the 1982 version of “Blade Runner” is set in a dystopian future where replicants are hunted down by bounty hunters like Harrison Ford’s rugged Rick Deckard.  Roy Batty, played brilliantly by Rutger Hauer, is the leader of a small group of fugitive replicants who have escaped from an off-world colony and returned to Earth.  They’re on a mission to discover how much longer they have to live (calculated via their incept dates), and this sends Roy on an eerily childlike quest to find his maker.  When he learns that his entire life has been a lie, Roy lashes out at the cruel truth and murders his “father.”  But in the film’s final scene, instead of killing Deckard, Roy accepts his own mortality and embraces what it means to be human.

They say a story walks on two legs—the hero and the villain.

But the best villains always walk on eight legs.

Bio:  Alice Blanchard’s new psychological thriller “A Breath After Drowning” (Titan Books) comes out on April 10, 2018.  Visit her website:  https://aliceblanchard.com/  Or follow her on Twitter:  https://twitter.com/AliceBooks333.