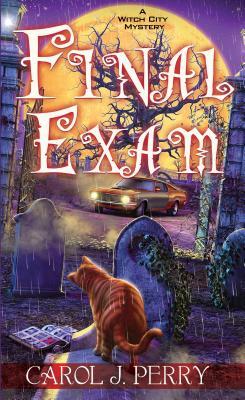 Life at the house on Winter Street is abuzz with preparations for Aunt Ibby’s 45th high school reunion, and Lee Barrett is happy to pitch in, tracking down addresses and licking envelopes. But as a field reporter for Salem’s WICH-TV, her priority is to be on top of the town’s latest news before anyone else.

When the local police dredge up a vintage sports car containing human remains, Lee is thrilled to be the first reporter on the scene. Once she learns the car is connected to the cold case her boyfriend Pete happens to be working on, her powers of investigation are quickly alerted.

But it’s her Aunt Ibby’s emotional reaction to Lee’s TV report that puts her on the case. With the help of O’Ryan, her psychic feline sidekick, she’ll have to unravel a tangled past of secrets and promises to stop a killer from making history again . . .

Final Exam was my first introduction to Lee Barrett and O’Ryan, but I am so pleased to have found them! In this story, Lee is the lead reporter covering a cold case – human remains found in an old car. It doesn’t take long to realize that the cause of death may have been murder, and the culprit may still be around.

Final Exam has a fun cast of characters, especially O’Ryan. I love cats in cozies, and a psychic one is just that much better. The mystery itself was very well done and I really enjoyed this book.

Final Exam is book #8 in the Witch City Mystery series, but you can definitely read this as a standalone. I would have liked to have had a little more background on the characters before I started this one, but I plan on going back to the beginning of the series so I will have that soon.

I’m thrilled to also be able to share a recipe from the book – I love ginger, and this sounds delicious. 🙂

Beat biscuit mix, egg, milk, ginger, cinnamon, and cloves with a hand beater until smooth. Pour scant ¼ cup batter onto hot griddle. (If yours is the kind that needs grease, grease it.) Cook until pancakes are dry around the edges. Turn. Cook until golden brown. Serve with lemon sauce.

For the lemon sauce:

Heat all the ingredients to boiling over medium heat, stirring constantly.

Carol J. Perry knew as a child that she wanted to be a writer. A voracious reader, whose list for Santa consisted mostly of book titles, she never lost sight of that goal. While living in Florida, Carol was on assignment for Southern Travel Magazine, preparing an article on the world’s largest sand castle which was being built near her home. That combination of events inspired her first young adult novel, Sand Castle Summer. That book was soon followed by half a dozen more.

Carol has always been an avid reader of mysteries. Her debut mystery novel is set in Salem and involves O’Ryan, a most mysterious cat, several witches and some strange Halloween happenings. Appropriately enough, this Salem-born author celebrates her birthday on Halloween Eve! Carol and her husband Dan live in the Tampa Bay area of Florida with two cats and a Black Lab. Visit her at www.caroljperry.com.

Enter the Rafflecopter giveaway for your chance to win a print copy of Final Exam by Carol J. Perry (US Only)

Be sure to visit the other blogs on the tour!