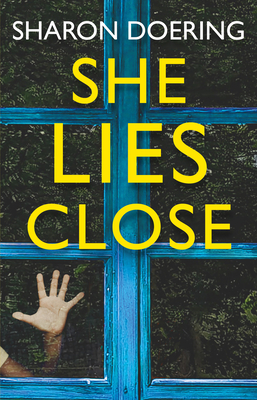 A compulsive debut thriller about motherhood, obsession and how far we’d go to protect the ones we love.

Five-year-old Ava Boone has been missing for six months. There have been no leads, no arrests, no witnesses. The only suspect was quiet, middle-aged Leland Ernest.

And Grace Wright has just bought the house next door. Recently divorced, Grace uprooted her two small children to start again and hopes the move will reset her crippling insomnia. But now she understands bargain-price for her beautiful new house.

With whispered neighbourhood gossip and increasingly sleepless nights, Grace develops a fierce obsession with Leland and the safety of her children. Could she really be living next door to a child-kidnapper? A murderer?

With reality and dream blurring more each day, Grace desperately pursues the truth – following Ava’s family, demanding answers from the police – and then a body is discovered…

She Lies Close is the domestic thriller debut from author Sharon Doering.  This is heart-pounding thriller, made even more so by the fact that I have two daughters myself. They are no longer small, but it made it easy to empathize with Grace’s fear for her children.

This is a unique story, not just the missing child, solve the crime story I was expecting after reading the blurb. There is also the domestic drama of Grace’s new life after divorce and some dark humor as well. I really enjoyed this book and can’t wait to see what comes next from Sharon Doering!

Read on for an excerpt from the book…

“My neighbor is a suspect in a criminal case.”

Although, at this point, five months in, it has probably turned into a murder case. But I don’t want to say murder. I’m not ready to say murder.

My disclosure feels stagy and unnecessary, but my neighbor’s criminality has been a cloud of noxious fumes—something godawful like burning PVC—trapped inside my mind for days, and I have been desperate to vent. And Valerie should keep the doors locked. What if she was planning to lie on my couch with the front door open, warm summer breeze breathing through the screen?

“Oh my God, Grace. Ava Boone? Oh God. That poor angel.” Valerie claps her hands to her cheeks and drags the skin down, nudging her glasses straight in the process. “That poor baby should be starting kindergarten like my Max. This is crazy. Why didn’t you tell me?”

“I only found out a few days ago.”

“Why is your neighbor a suspect?”

“I don’t know all the details,” I say, which isn’t exactly a lie. “He’s probably innocent. They haven’t arrested him, right? He’s probably a good guy.” I’m trying for optimistic, I’m championing devil’s advocate, but my voice wavers because he’s not a good guy. “I’m just being on the safe side.”

“Safe side? Ditching your kids to go for a jog? What were you thinking?” She’s not patronizing me or being a dick. It’s a fair question.

I have several answers, each of them honest.

I go with the easiest answer. “I haven’t slept in four days, Val. I was trying to knock myself out.”

“They got drugs for that. Or why not polish off a bottle of wine? That’s what I do.” She shakes her head, dumbfounded, same as the long-haired teenage boy. “Didn’t you check the neighborhood before you bought?” There is  support and concern in her voice, but also judgement. What kind of idiot mother are you?

“I checked the predator site, but what else can you do? Go door to door, asking if anyone’s a suspect in a kidnapping? He’s not convicted of anything. She’s still missing.”

“Missing?” she says. “You know seventy-six percent of kidnapped girls are murdered in the first three hours.”

Seventy-four percent, according to my Google search. “I know. I should go, Val.” She’s put me on the defense, which I hate. And my neck stings. Images of the water-fearing, rabies-infected Indonesian teenage boy I saw on YouTube resurface.

“OK, you go.” Avoiding the mangled side of my neck, she hugs me quickly, but generously. A good hug. One that makes me realize I am in serious need of adult contact.

Wyatt’s eight-year-old hugs are few and far between, and when he gives them, he turns his face away from my eyes and my clothes as if the smell and the sight of me is unbearable. Before the hug even begins, he is pulling away.

Chloe’s three-year-old hugs are communion, all fluttering butterfly hands and moist skin, but they are also greedy. Chloe is known for holding my face between her grubby palms and squeezing hard. If she can’t reach my face, she is on my leg, her small hands grabbing the cellulite on my thighs.

Kids are takers. They poke their little straws into your Capri Sun soul and they suck.