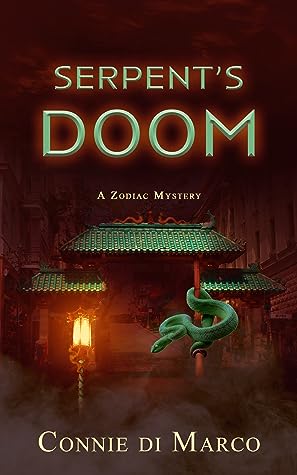 As San Francisco’s Chinatown prepares for the Lunar New Year festivities in the fogbound month of February, astrologer Julia Bonatti finds herself with three new clients, all in desperate straits who don’t seem to heed her advice.  Tracy is the victim of a brutal husband with nowhere to run and Jeanette is worried sick about her son, whom she suspects has fallen in with a bad lot.

But most frightening of all to Julia is Frankie Chang’s dilemma.  Frankie’s only eleven years old and he’s terrified.  His mother is missing and no one will help him.  Julia’s heart goes out to him but her hands are tied.  Frankie won’t let her talk to the police and neither will his family.

Julia eventually discovers that the three worlds of her clients intertwine.  Those lives inevitably collide exposing a dangerous smuggling cabal.  Julia knows too much and becomes a victim of both a ruthless environmental group and criminals who will stop at nothing, including murder.

Hello all! I have a treat for you today – an excerpt from Connie di Marco’s upcoming book Serpent’s Doom (available April 26, 2022). This will be the fourth book in the Zodiac Mystery series. Read on, and if you like what you see, be sure to pre-order your copy here!

Cheryl, the manager of The Mystic Eye, signaled to me.  I was at the Eye to fill in at the evening’s psychic fair.  She indicated a young woman in a cotton skirt and denim jacket. Her dark hair was cut in bangs and pulled back in a low ponytail. She wore no makeup and clutched a small, zippered plastic purse in her hand. I nodded to Cheryl and headed down the narrow side corridor to the small reading room I had been assigned for the evening, each space protected by a heavy drape.

I took my seat and cleared my astro program for my upcoming visitor. She was slender, young, mid-twenties at a guess. Her legs were bare under her cotton skirt and I was sure her denim jacket didn’t sport a designer label. She was hardly dressed adequately for the chilly night. Her jaw was clenched and her hands were red and raw, her nails bitten to the quick. As she took her seat across the small table from me, the collar of her denim jacket pulled away betraying darkened discolored skin at her collarbone. A bruise? She was so tense she seemed to vibrate. The electricity was difficult to ignore. Was it anger? Fear? Maybe an unnecessary terror of the occult? That might explain her tension, but still…that bruise raised a red flag.

I smiled, said hello and introduced myself. She nodded and watched me intently. I asked if she was familiar with astrology and she said she wasn’t. “Well, let me explain a little. Your natal chart is a map of the heavens at the time of your birth. It shows the gifts and talents you bring to this incarnation. It also shows the difficulties you’ll contend with in life. Do you have your birth information?”

“Yes.” She nodded and passed a slip of paper to me. There were two birthdates, with time and location, jotted down hastily. She knew enough to offer the information I needed to set up a chart. Perhaps she wasn’t as clueless about astrology as she first claimed.

“Tracy. Tracy Wyler. The second birthdate is my husband’s.”

“Okay, Tracy.” I plugged the information into the program on my laptop and two charts were instantly generated. “Would you like to focus on your chart? Or perhaps on your relationship with your husband?” She nodded but didn’t answer. I clicked on the bi-wheel option where I could see both charts at once, displayed in inner and outer rings. Then I set up a composite chart. I didn’t like what I saw. There were connections between the charts that indicated physical attraction, but I didn’t like the Mars and Saturn and even Pluto connections from her husband’s chart to her personal planets. I checked the composite chart, hoping something more positive would be indicated. As often happens in astrology, the composite echoed the synastry, or comparison, of the two individual charts.

This was not a good relationship for her. Her body language told me a lot, even without the insight of the charts. There was no choice but to go for it. She obviously needed help and I had only fifteen minutes to offer her what I could. I had to be blunt. She’d either listen or react with anger. “Tracy, you already know what I’m about to say. You need to escape this marriage.”

She gasped. Her eyes widened. She nodded her head quickly and tears sprang to her eyes. “I know things aren’t good but I don’t know what I can do. I have no place else to go.”

“He’s hurt you, hasn’t he?” The Mars and Uranus aspects to her husband’s Sun sign indicated anger and the possibility of violence if unchecked. There was that, but it was more the connections between these two individuals that concerned me. She reached over and rolled up one of the sleeves of her jacket. Dark bruises lined her arm. She craned her neck and showed me another mark on the side of her neck. “How long has this been going on?”

“We got married three months ago. It started a few days after. He keeps telling me I can’t do anything right. That I’m stupid.” She stifled a sob and took a deep breath. “He says…he says I’m so ugly that I better behave because no one else would want me.” Tears were filling her eyes, her breathing was shallow. I passed a small box of tissues across the table. “But then, when he cools down, he says he’s sorry, that he really loves me and he won’t do it again…”

“I have to say this, Tracy. I doubt this will change. Even with a lot of psychological help, even if he was willing…it’s a recurring pattern.”

“Do you have any family?”

“Only my mother and she’s in Indiana.”

“What does she have to say?”

“She says I should listen to my husband. After all, he works and he supports me.”

I felt a slow rage rise in my chest. What kind of a woman would advise her daughter to submit to physical abuse? Any kind of abuse? “What he’s doing is against the law, Tracy. You may not be aware of this, but we have serious laws in California against this type of thing. The police are required to arrest anyone accused of abuse. It’s not up to the cops to decide. They must arrest the accused party. All you have to do is call the police, show them what he’s done to you, and he won’t be coming home.”

“They won’t arrest him. They won’t. He’ll convince them, he’s so persuasive.”

I reached across the table and grasped her hand. “You don’t understand. Here the laws are different. The police have no choice. He’ll be held, maybe without bail, and he’ll be charged. That would give you time to get away and find shelter.”

She began to cry in earnest. “It won’t matter. Eventually he’ll get out and come after me. It’ll be worse than before.”

“All the more reason. Once the police take him away, you can go to a women’s shelter. Listen….” I had to break through her wall of hopelessness. “I keep lists of all kinds of resources for my clients.” I quickly opened a document on my laptop. I wasn’t attached to a printer in the tiny reading room, but I grabbed a notebook from my purse and jotted down the addresses of the three nearest shelters and passed the slip of paper to her. “The police will even take you there and they are not allowed to give out your location. And if you want, they’ll escort you home to retrieve your personal belongings. Do you have children?”

A dark foreboding swept over me. This woman should not return home tonight. “What do you say, we go into the office here and call them right now? I’ll stay with you till they arrive.”

“I…I don’t know….” She twisted her fingers together. “He says he loves me, that he’s sorry. That it’ll never happen again.”

Yeah, right, I thought. Heard that one before. I waited, trying to see which way she’d go. There were aspects in her natal chart that indicated introversion and shyness. If she had met another type of man her fate would be quite different, but whoever this guy was…he’d use her like a punching bag.

“Tracy, do you have any idea how many women are killed by their husbands or partners in this country? I happen to know these statistics. It’s important in my line of work. Clients come to me with all sorts of problems.” It’s all well and good to talk about Moon signs and romance and money opportunities, but some people are already on the ropes, already at their weakest and most vulnerable, and one of them was sitting across from me right now. “Of the women murdered in the U.S. alone, ninety-seven percent are killed by their partners or husbands. Every single day three women die because of domestic violence. Those are real bad odds, Tracy. You can be safe. You can divorce this man and you can find a way to support yourself. It won’t be easy, but at least no one will be hurting you. And there are people who will help you.”

“Look, Tracy, first things first. You need help. You need to get to a safe place. Later, you can sort out all your feelings, but first you need to find shelter so you can get your head on straight.”

“Come on. Come with me. We can have privacy in the office.” I reached out for her hand, a hand that was ice-cold. She quickly pulled away and clutched the slip of paper in her hand.

“I’m sorry…” she whispered. She stood and ran out of the reading alcove. I hurried after her, but she was too fast. She had pushed through the front door. I caught a glimpse of her through the plate glass window, running toward Columbus Avenue. I hurried to the door, hoping to catch up with her, but when I reached the sidewalk she had already turned the corner at the end of the block. I ran down the street but she was nowhere in sight. I sighed and walked back to the front door of The Mystic Eye. If she was afraid to turn her husband in, I hoped she’d at least head to a shelter to protect herself.

Connie di Marco is the author of the Zodiac Mysteries featuring Julia Bonatti, a San Francisco astrologer who never thought murder would be part of her practice.  Writing as Connie Archer, she’s the national bestselling author of the Soup Lovers’ Mysteries from Berkeley Prime Crime.  Her recipes and excerpts can be found in The Mystery Writers of America Cookbook and The Cozy Cookbook.  Connie is a member of the Crime Writers Association (UK), Mystery Writers of America, International Thriller Writers and Sisters in Crime.