Palmetto Poison by C. Hope Clark
Narrated by Pyper Down 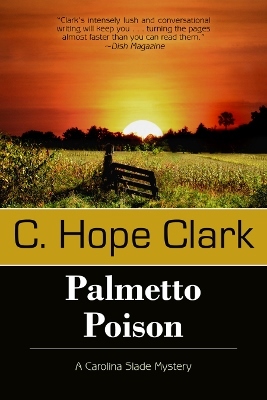 After the Governor’s brother-in-law is charged with possessing and distrusting prescription medications illegally, Slade’s boss asks her to look into the matter. As soon as she starts investigating though, people start dying, and no one seems to want to cooperate with her investigation.

This was my first Carolina Slade (or Slade as she prefers to be called) mystery. I do think I would have liked to read or listen to the others first just to better understand some of Slade’s fears and reactions to things. There are lots of references to previous events, with enough explanation that there’s no problem understanding what is going on, but I am very curious about her past now.

She really has a lot to deal with in this story – the Governor is angry at her continued snooping, there is a black SUV stalking her, her boyfriend’s ex-wife shows up on the trail of said boyfriend’s missing sister, and her teenage daughter thinks Slade is too old to have a handle on reality. Even so, I occasionally found her stubborn and unreasonable enough to make me want to slap her. I really think she behaves the way she does out of fear after her past experiences, though, so it doesn’t make her less likable.

Pyper Down did a good job with the narration – her southern accent was slight, enough to remind you where everything was happening, but not enough to be distracting. I hope she will continue with the series.

I think anyone who is a fan of the Temperance Brennan (Slade and Wayne reminded me a bit of Tempe and Andrew Ryan) or Kay Scarpetta novels would enjoy this one.