Off the Books by Lucy Arlington
A Novel Idea Mystery, #5 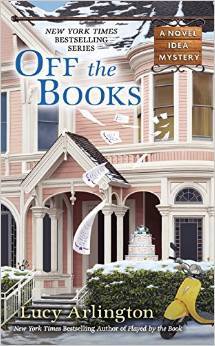 Literary agent and amateur sleuth Lila Wilkins is back to seal the deal in the New York Times bestselling Novel Idea Mystery series.

Lila is showcasing some of her biggest authors at a bridal expo. But when the joyous event turns deadly, she’ll have to figure out who penned the perfect crime…

The Novel Idea Literary Agency has planned a wedding-themed week for Inspiration Valley, celebrating not only North Carolina’s best vendors but also some of the agency’s most popular bridal books. The fact that Lila can use the event to plan her own impending nuptials is just the icing on the cake.

But wedding bells turn to warning bells when Lila finds a dead man facedown in the frosting. Soon it’s discovered that the victim was connected to several Novel Idea authors, all of whom quickly become suspects in the case. It’s up to Lila and her fellow agents to find the real killer before one of their clients winds up scribbling stories from behind bars…

I have been lucky with my book choices lately, and this cozy mystery was another great read. I jumped in at book #5, but still felt a connection with the characters almost right away. You definitely don’t need to have read the first four books in the series before diving into this installment.

In Off the Books, Lila is helping prepare for a bridal expo jointly presented by an event organizer and the literary agency she works for. The event no sooner gets started than Lila, already nicknamed the “murder magnet” by some in town, finds yet another corpse. This one turns out to have been murdered in a way suggestive of scenes from two of her agency’s authors’ books. With A Novel Idea’s reputation at stake, Lila’s boss decides that the staff of the agency need to band together to find out who the real murderer is.

An unusual method of murder and a plethora of suspects kept me guessing until the end, and Lila’s personal life kept it interesting as well. I enjoyed getting to know the staff at A Novel Idea and Lila’s family and friends, and can’t wait to return to Inspiration Valley to learn more about them. I’ve already picked up book #1 in the series so that I can catch up.

I would highly recommend this one to all cozy mystery lovers, or to anyone who has ever thought about publishing a book (or is even a little bit curious about the process). I enjoyed the glimpses into Lila’s professional life – enough to give you a taste of a literary agent’s life but not bog down the story with too many details. 🙂

NOTE: I received a free copy from the author in exchange for my honest review.