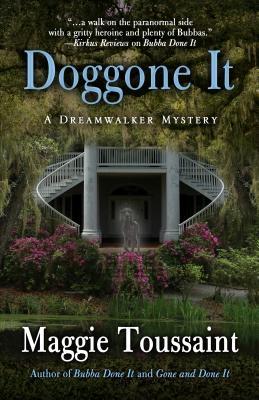 Book 3 of The Dreamwalker Series.

I frequently read paranormal cozies, but this was my first encounter with a ghost dog! Baxley’s abilities as a dreamwalker were unique, and when they stopped working for her, it added a whole new layer of conflict to the story. The mystery kept me guessing, the characters were entertaining, and the paranormal element was a lot of fun.

Doggone It is book #3 in the Dreamwalker series, but the first one that I read. I had no trouble figuring out what was going on, or who was who, but I wish I would have read the other books just to have seen the characters relationships develop firsthand.

Enter the Rafflecopter giveaway (ENDED)for your chance to win a signed copy of Doggone It! (US Only)

Formerly a contract scientist for the U.S. Army and a freelance reporter, mystery and suspense author Maggie Toussaint has thirteen published books. Her recent mystery releases include Gone and Done It

, and Dime If I Know

. Her latest mystery, Doggone It

, is Book Three in her dreamwalker series about a psychic sleuth.

Maggie won the Silver Falchion Award for Best Cozy/Traditional Mystery. Additionally, she won a National Readers’ Choice Award and an EPIC Award for Best Romantic Suspense. She was twice nominated for the Georgia Author of the Year Award and finaled in the Beacon and the Readers’ Crown Contest.