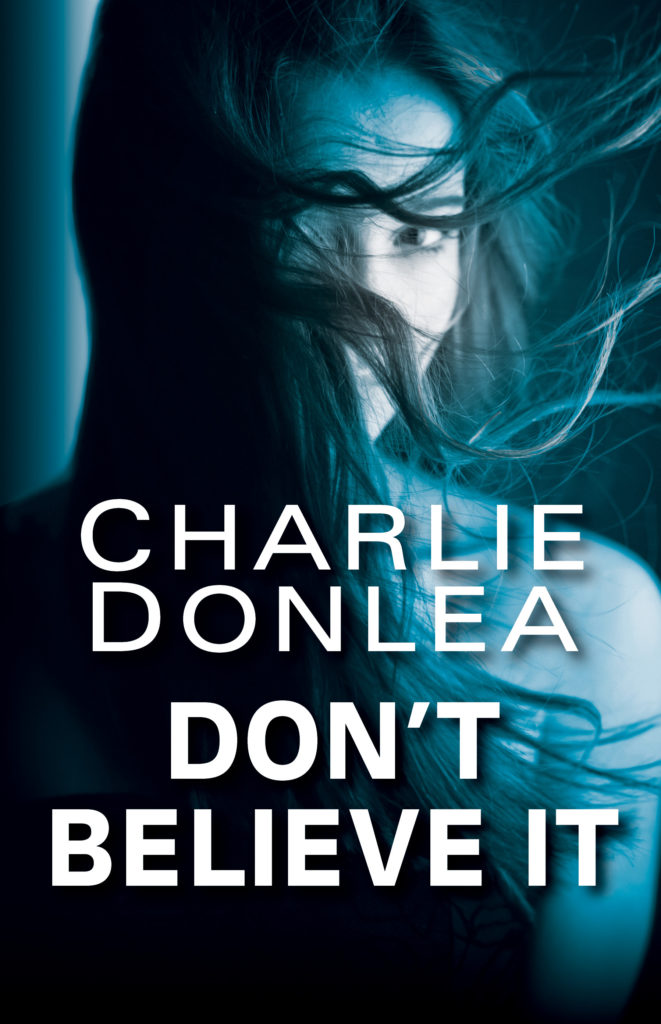 From acclaimed author Charlie Donlea comes a twisting, impossible-to-put-down novel of suspense in which a filmmaker helps clear a woman convicted of murder—only to find she may be a puppet in a sinister game.

The Girl of Sugar Beach is the most watched documentary in television history—a riveting, true-life mystery that unfolds over twelve weeks and centers on a fascinating question: Did Grace Sebold murder her boyfriend, Julian, while on a Spring Break vacation, or is she a victim of circumstance and poor police work? Grace has spent the last ten years in a St. Lucian prison, and reaches out to filmmaker Sidney Ryan in a last, desperate attempt to prove her innocence.

As Sidney begins researching, she uncovers startling evidence, additional suspects, and timeline issues that were all overlooked during the original investigation. Before the series even finishes filming, public outcry leads officials to reopen the case. But as the show surges towards its final episodes, Sidney receives a letter saying that she got it badly, terribly wrong.

Sidney has just convinced the world that Grace is innocent. Now she wonders if she has helped to free a ruthless killer. Delving into Grace’s past, she peels away layer after layer of deception. But as Sidney edges closer to the real heart of the story, she must decide if finding the truth is worth risking her newfound fame, her career . . . even her life.

This gripping thriller from author Charlie Donlea starts out seemingly straight-forward enough. Documentary filmmaker Sidney Ryan is contacted by an old friend who has been convicted of murder, and asked to look into the case with the object of clearing her friend’s name.

The farther in Sidney gets though, the more I started to second-guess everything I thought I knew about the murder. Don’t Believe It caught my attention from page one, and the pace and tension both pick up as you go.  I look forward to reading more thrillers from Charlie Donlea.

Sound good? Keep reading to check out Chapter 1 and 2, and then see the purchase links or enter the giveaway below to get your own copy!

The blood was a problem.

I knew it as soon as I felt it spit across my face. It streamed from
his hairline and ran along his jaw until it dribbled onto the granite
bluff, first in sporadic red blots, like the leading raindrops of a
coming storm, and then in a continuous stream, as though a
spigot had been plugged into the spot on his head where I had
struck him and had opened wide. It was an error in judgment and
strategy, which was a shame because up to now I had been perfect.
A moment earlier, the soft soles of my shoes had squished
through the mud on the final turn of my arduous hike up the
Piton. My system was rich with adrenaline, which made my journey
nearly effortless. The endorphins would serve me well. I
would need their analgesic and energy-producing powers to get
back down the mountain as quickly as I’d made it up. To kill
someone required perfection, timing, and luck. I hoped all three
were with me this evening.

He came into view. As he stared out over the bluff, the setting
sun cast his shadow toward me like a black panther painted over
the ground. He stood next to the blanket he had laid over the
granite, a bottle of champagne and two flutes waiting. In the
backdrop the sun was approaching the horizon, casting its glow
across the calm Caribbean waters and interrupted only by a sailboat
whose bright spinnaker was bloated with the evening breeze.
It was one hundred feet to the water. A straight drop, and shallow
at the base of the mountain. No way for the sea to substantially
break his fall. I’d confirmed this the day before. I had put
much thought into this evening. Besides the depth of the water, I
calculated the time it would take for me to reach the bluff and return
to my cottage. I plotted my route back through the resort. I
factored in the unexpected, a necessity to any proper strategy.
And, most important, I considered the amount of time I would
spend with him on the bluff. It wouldn’t be long.

From my spot in the foliage, I took a few silent steps forward
until he was accessible, close enough to touch. But physical touch
would be limited this evening. Physical touch would leave clues
and fibers and forensics. My weapon allowed me to stay at a safe
distance. I lifted it, pausing slightly at the peak of the arc when my
hand was raised high above my head, then brought it down in a
sharp rap against his skull. The connection was solid. A direct
strike that he didn’t anticipate and likely never felt. Besides a
quick synapse that radiated through the neurons of his central
nervous system, he likely felt nothing at all. No pain, no suffering.
Unless, of course, he was still conscious when he went over the
edge. I try not to dwell on that.

I knew immediately that I had been too aggressive with my
assault. My goal was to stun him and render him incapable of
defending himself. Instead, my strike nearly killed him. He reflexively
reached for the back of his head and fell to his knees. I
waited and watched, unsure how things would progress. He
seemed to recognize the blood as it poured onto the granite, and
gained enough wherewithal to stagger back to his feet. Before he
could turn around, my shoe met the back of his pants and he was
gone. I didn’t hear him land, never heard a splash. I dared not
venture to the edge of the bluff for fear that someone had spotted
his body tumbling toward the ocean, like a skydiver whose
chute had failed, and would subsequently look to the source of
the fall and see me peering over the ledge.

I assessed the bluff now and worked to figure out the best way
to fix my blunder. The blood would tell a different story than I
had hoped to draw tonight. It took only a fraction of a second to
make my decision. The carnage on the bluff was impossible to
hide. The splatter across my face, however, needed to be addressed.
On closer inspection, the spray of blood streaked down
my chest and onto my left hand. Another collection of red, I noticed,
had speckled my weapon. It was an unfortunate error—unforced
and brought on entirely by my eagerness. There was no
way to solve all of these problems. I chose the most pressing—the
blood that was covering me—and settled on a solution. I turned
from the setting sun and the blood-covered bluff and ran down
the Piton, stomping over dirt and through brush and down the
man-made staircase of boulders and bamboo on a beeline to the
cottage.

Julian Crist made the hike up Gros Piton in St. Lucia’s southwestern
point in just under thirty minutes. Summiting the Piton
was a popular tourist excursion, and he and his group had made
the trek the day before. This evening, though, Julian ascended
only to the Soufriere Bluff, a spot he had found yesterday and determined
to be a perfect place to watch the sunset. A simple hike,
it required little more than following the trail that spun its way
around the base of the mountain. The most strenuous part of the
journey was a steep climb up a series of fifty steps built into the
side of the cliff by native St. Lucians who used boulders and bamboo
to create a navigable staircase across the steep lower gorge.

Once a hiker was past the only spirited challenge on the way up
to Soufriere Bluff, the rest of the climb was a tranquil waltz along
a dirt path that offered occasional glimpses of the Caribbean Sea
and the Jalousie Plantation. It was a picturesque hike, but when
he made it to the clearing, Julian knew he’d picked a flawless location
for what he had planned. He pulled his backpack off his
shoulders and laid the blanket across the smooth granite of the
bluff. Below him was a pristine view of the Pitons Bay, where, in
about forty minutes, the sun would descend from the cloudless
blue sky and sink into the horizon.

He checked his watch. To make up for his foolishness, the
setting needed to be perfect before she arrived. He had nearly
ruined everything earlier today. He’d been wrong to accuse her,
especially when it was he who was hiding things. But he’d make it
up to her tonight. He pulled two champagne flutes from his bag
and popped the top on a bottle of Veuve Clicquot Yellow Label,
the cork rocketing into the air in a high arc until it fell out of sight
over the edge of the bluff. His stomach dropped as he watched
the cork’s flight. For the twentieth time since starting up Gros
Piton, Julian checked his pocket, rubbing his fingers over the
edges to make sure he hadn’t lost it.

With everything prepared, Julian stood to the side of the blanket
as he looked out at the falling sun. A sailboat, with its colorful
sail full of wind, angled across Pitons Bay. Down to his right, he
could see Sugar Beach and the small group gathering to watch
the sunset. If there were a more beautiful place on earth, he’d
never seen it.

He heard a twig snap behind him, and wondered briefly how
she had reached the bluff without him sensing her approach. Before
this thought could trigger his muscles to react, a jolt coursed
through his body. It started in his head, a quick shock that stalled
time and congested his movements, like swimming through oil.
Only the trickle of blood through his hair and over his ear caused
his mind to catch up with the present. He touched the spot on his
head where the shock wave had originated, managing to get
his hands back out in front of himself as he fell forward onto his
knees. On all fours, he watched as blood fell onto the granite as
he leaned forward, like an artist dribbling paint onto a canvas.
The sun highlighted his right hand, the fingers of which were
shiny red prongs that felt as though they belonged to someone
else.
He staggered back to his feet and took unsteady steps, two forward
and one to the side in an attempt to turn around. A firm
jerk—a shoe planted in the small of his back—snapped his neck
backward and sent him careening toward the edge of the bluff.
He felt his stomach rise again, as if he were rewatching the arc of
the champagne cork. A twisted image of the mountain face, lush
with green foliage, filled his vision for three full seconds before
the ocean came up and grabbed him.

High on Soufriere Bluff, the setting sun highlighted the spilled
blood and cast shadows of the champagne bottle and two flutes
across the granite. They stretched to their full length, three inanimate
objects pulling all the contradictory darkness of their shadows
from the brightness of the sun, until an hour later when they
faded and melted into the night.

USA Today bestselling author Charlie Donlea was born and raised in Chicago. He now lives in the suburbs with his wife and two young children. Readers can find him online at http://charliedonlea.com

May 23 – The Pulp and Mystery Shelf – AUTHOR INTERVIEW

May 24 – Escape With Dollycas Into A Good Book – REVIEW

May 29 – Mysteries with Character – AUTHOR INTERVIEW