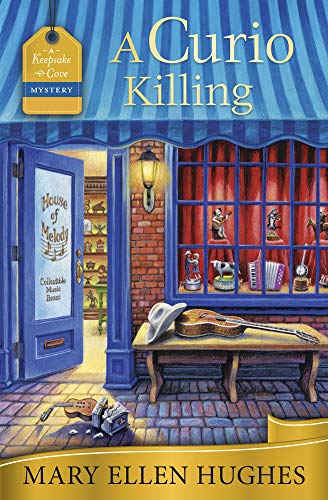 Callie finds treble in Keepsake Cove when her ex-boyfriend is framed for murder . . .

Callie Reed is looking forward to her first Keepsake Cove spring festival. But her excitement dims considerably when she learns that her ex-boyfriend, Hank, will be performing with one of the hired country-western bands. Callie vows to keep her distance, but that changes when the band’s manager, Bobby Linville, is found dead, killed with the music box Hank bought at Callie’s shop.

Hank is soon singing a sad tune in a detention center with Callie his only lifeline. Though thoroughly aware of his many faults, she knows violence and murder aren’t in his blood. But that means one of her fellow Keepsake Cove residents must be hiding a dark secret—something Callie desperately needs to uncover.

Callie Reed has to step in when her ex-boyfriend’s band’s manager is found dead and it looks like her ex might be the killer. Callie may no longer be his biggest fan, but she is sure that he isn’t the violent type.

I enjoyed the kind-hearted protagonist, the interesting town setting, and Callie’s music box shop. The mystery was well written and there were enough suspects to keep you guessing without being confusing. While A Curio Killing is the 3rd book in the Keepsake Cove mystery series, you can easily read this without having read books 1 and 2. I think I will go back and start at the beginning though to get a better feel for some of the recurring characters.

Now please join me in welcoming Mary Ellen Hughes to The Book’s the Thing!

When people I meet learn for the first time that I’m an author, their first question often is, “Children’s books?” They’re taken aback when I answer, “No, mysteries. Murder mysteries.”

Apparently I have a motherly presence as someone who, if inspired to write stories would obviously make them about kittens and bunnies and other cuddly things. But appearances can be deceiving. My chosen topic is murder. Why? Let me explain.

It’s not that I enjoy the act of murder—no, not all—and I would never write a detailed description of someone being murdered, which is why I choose to write what are called cozy mysteries. My murders are always off scene. The bodies are discovered after the fact, and I don’t describe the injuries done to them or write scenes on autopsies. My focus is on who did it and why. A plot about solving a murder is exactly that.

I also love creating characters—all kinds, good and bad. The bad ones can be the most fun but also the trickiest to write because I need to hide the fact of their badness for a long time. There’d be no story, would there, if my murderer was obvious from chapter one? So I need to create a character who appears to be a lovely person, possibly with a few quirks but harmless-seeming ones. He or she might have a reason to have murdered my victim but it doesn’t seem strong enough. Or there’s a pretty good alibi that rules them out, an alibi that can be chipped away over time by my protagonist.

I also need to drop hints about the other side of my bad characters, so that when all is revealed my readers, while hopefully surprised, will say, “Yes, I thought there was something about him/her!” something that niggled at the backs of their minds. We all do it, you know. We generally hate to believe the worst about people and try to rationalize away negative signs. We’re being kind, but that can also get us into trouble.

I love creating well-behaved characters, too, especially my protagonists. Since I’m a woman, I find it easiest to make them female. I have male characters, too, of course, but my main characters will be the most detailed, since they’re leading most of the action. I need to be in their heads, to know what they might be thinking or how they’ll react, so female works best for me.

They’ll be good characters, but they also have to be believable. Nobody is perfect (except, of course, all of our children and grandchildren, but that’s a whole other topic, right?.) I want to make my protagonist likeable but have certain shortcomings, things that might make them overlook a clue or get them into trouble—maybe by rationalizing away those negative signs I mentioned.

So that’s partly why I love writing about murder. The characters, the puzzle involved, oh, and also the tension that naturally comes with it. Children’s books are fine for a lot of things, but they wouldn’t offer me the challenges of a murder mystery. I may appear sweet and motherly to some, but I love the challenge of a good murder. Don’t you?

Mary Ellen Hughes is the bestselling author of the Pickled and Preserved Mysteries, the Craft Corner Mysteries, and the Maggie Olenski Mysteries, along with several short stories. The Keepsake Cove series begins with A Fatal Collection and continues with A VINTAGE DEATH and A CURIO KILLING.

September 6 – I’m All About Books – SPOTLIGHT

September 7 – The Power of Words – REVIEW

September 10 – Escape With Dollycas Into A Good Book – REVIEW

September 12 – I Read What You Write – SPOTLIGHT

September 15 – Cozy Up With Kathy – REVIEW

September 18 – Reading Is My SuperPower – REVIEW

September 19 – View from the Birdhouse – REVIEW