Eden at the Edge of Midnight by John Kerry 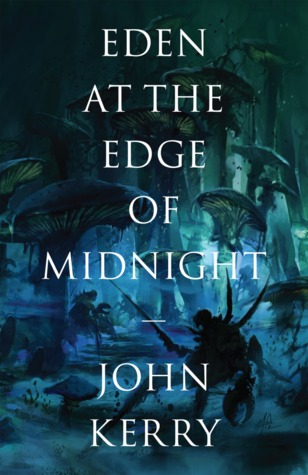 ***NOTE: I received a free copy of this book from StoryCartel in exchange for an honest review***

Synopsis from Goodreads:
The Vara of Yima, the original Garden of Eden, sealed from the rest of the world and populated with the fittest of men and women. A secret paradise that 150 years ago became ravaged by smog that choked out the skies.

Now the Vara exists in a permanent state of darkness and its people need a champion, a chosen one to save them from the smog that threatens to fill the realm…(read more)

This was a well-written fantasy with well defined and realistic characters. That always makes it so much easier to be concerned for their well-being, and I did care what happened to Sammy and her companions. Sammy is an average human teenage girl who finds herself alone on a strange world, trying to survive and find her way home. Along with her new-found companions Mehrak, and his dinosaur/house Louis, Sammy has to escape the crabmen, figure out whether or not she might be the golden haired child of prophecy, decide which of those claiming to be trying to help her are actually on her side, and find the book that might show her the way to get back home to Earth.

I started to panic about 20 pages from the end because I knew there was not enough time for everything that I wanted to happen, to happen! Thankfully book 2 is on the way, but now I have to wait until October to read Back to the Vara.