An Ember in the Ashes by Sabaa Tahir (audio CD edition) 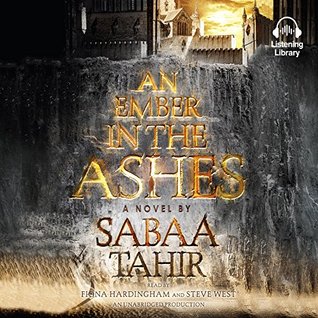 I had been listening to this audiobook for about a week during my commute to and from work, and when it ended on my way home, I couldn’t believe it. It couldn’t end there. It just couldn’t. I wasn’t ready. I wanted to know, no, needed to know what happened next! While not a cliff-hanger, there are so many things left unresolved at the end of this story, so many things left to be done, that I really hope Ms. Tahir has at least another 2 or 3 books up her sleeve. (NOTE: Since writing this review I have scoured her Goodreads page and found that yes, book #2 is in the works. I can breathe a little easier now…)

An Ember in the Ashes is the story of Laia, a Scholar girl, and Elias, a soldier in training for the Empire’s army. The Scholars are the lowest class citizens in the Empire, and many of Laia’s people have been killed or enslaved. Her own parents and older sister were killed for being rebels. Elias is just finishing his training as a Mask, one of the Empire’s elite soldiers. When Laia’s remaining family is raided one night, she goes undercover as a slave at the military academy to try to gain information she can trade to the Scholar resistance, so that they will help her find and free her brother who was captured during the raid.

There was a bit of a love triangle, which I usually hate, but each individual seemed so real, each with his own flaws and redeeming qualities, that it was easy to understand Laia’s feelings. And I loved Laia herself. She was no super-woman, just a frightened girl determined to do whatever she had to in order to save the only family she had left. She was scared, she second guessed herself, but she never gave up. I admired her determination, and it’s been a long time since I read a book that made me care so much about what happened to its characters.

I have to mention the narrators as well. I thought both of them did a great job, and having both a male and female narrator helped distinguish the point of view for each chapter. I hope they  will be available to read again when the next book in this series is ready!

If you enjoy Young Adult Fantasy, then I can’t recommend this book enough. I will be buying a copy of book number two just as soon as it is available!